“When were human beings created on Earth and how did they evolve into their modern form?” Now, this is a question that always triggers different answers ranging from being evolved from apes to cavemen to being created by God. Finding how all living forms, especially humans, originated in the first place has been pondered by researchers for decades and a new milestone in this crucial study has been the discovery of the “Dragon Man,” a new species of ancient human.

While the skull was discovered in 2018, it was only on June 25, 2021, that scientists finally published three papers announcing and discussing the massive fossilized skull that they have been studying. The skull, named Homo longi by scientists, establishes a new species of ancient human and has been nicknamed “Dragon Man” as it was discovered in the Dragon River region of northeast China.

It has been found that the skull of Dragon Man is that of a mature male who possessed a big brain, deep-set eyes, a big nose, and prominent brow ridges. It has also been discovered via the chemical composition of the fossil that it is more than 146,000 years old.

The Dragon Man skull was discovered by a laborer in 1933 at a bridge construction site in Harbin, China, occupied by the Japanese at the time. But instead of turning it over to the Japanese authorities, he decided to hide the skull in an abandoned well, where it remained for 85 years. It was only in 2018 that the man shared the secret with his family before dying. The family discovered the fossil in the well and decided to donate it to the Geoscience Museum of Hebei GEO University.

Till now, scientific studies have identified the Neanderthals as the closest ancient human relatives of our species, i.e., the Homo Sapiens because evidence suggested that the two species have a common ancestor. But now, the team studying the Dragon Man has discovered that actually Homo longi is much closer to the modern human as it is the actual sister group of Homo sapiens. Based on the scientific discoveries, it’s possible that future studies of the Dragan Man can put forward another and potentially a very plausible theory of how and where Homo Sapiens originated and evolved.

But there have been many points made that go against this possibility. In the papers published on Friday, researchers have shared that the Dragon Man appears to have been a very big-sized adult who had flat cheeks and a broad mouth with the lower jaw missing. It has been inferred that it is most likely that he didn’t have a chin and possessed a brain that was at least 7 percent larger than the size of the average brain of a human. His anatomical features are nothing like what has been observed in species of Hominin, the bipedal apes who eventually evolved into Homo sapiens. But even if this skull doesn’t answer questions about the origin of modern humans, it still contains many clues that would hopefully make it easier to map out human evolution. 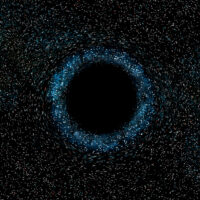 Hundreds Of Black Holes Are Moving Through The Milky Way