An asteroid as big as a London bus is set to come 2,100 miles away from the Earth's surface.

A massive asteroid is set to pass by Earth’s atmosphere, and be the closest to do so for the next 300 years. Scientists have deemed the asteroid 2023 BU which was discovered by NASA only last week, and it has been determined that it will travel as close as 2,100 miles away from our atmosphere. This revelation is quite frightening as most of the asteroids that pass by Earth usually do so by the moon, which is 240,000 miles away.

Scientists have compared this new asteroid to the size of a “London bus,” which means it could cause some catastrophic damage if it was able to get past the atmosphere of our planet. The space rock is said to be half the size of the Chelyabinsk meteor, which struck Earth back in 2013. The 2023 BU asteroid is said to be making the fourth closest pass by Earth, which NASA’s Center for Near Earth Object Studies (CNEOS) has determined.

The CNEOS holds data on all asteroids from 1900 to 2022. There are said to be 35,000 instances of meteors and asteroids that have passed by Earth in that time, and this upcoming one is now in the fourth spot of closest. We are not sure if that means we are getting closer to a big asteroid striking the planet, which is a scary thought to even have. The entire event is going to be live streamed when it takes place this Friday.

The 2023 BU asteroid is going to be quite small though, as it will not be able to be seen by the naked eye. Scientists will instead use powerful telescopes like the VTP’s 14-inch and 17-inch robotic ones in Ceccano, which could be what is used during the live stream. The space rock is also said to be 12.4 by 27.8 feet, which nearly measures identically to the Routemaster London bus.

Scientists have also determined that the asteroid has no chance of striking Earth despite it only being discovered five days ago. Most asteroids that are also less than 82 feet in length tend to burn up in the atmosphere, so chances are that this rock would not cause damage if it was heading right for our planet. Thankfully, we all don’t have to live in a real-life doomsday situation like in the movie, Don’t Look Up.

Virtual Telescope Project (VTP) in Italy will be handling the live stream duties and will make it available for everyone to watch Thursday at 19:15 GMT (14:15 ET). We would imagine seeing this asteroid is going to be quite beautiful, despite it being a scary thought that it could strike the planet. Astronomy aficionados can watch the live stream to see this wonderful event.

Thankfully, this asteroid does not pose any danger to us currently, but a space rock getting this close to the planet is still a bit unsettling. Hopefully, scientists can continue their great work and alert us all if some giant asteroid is going to collide with the planet and wipe us out like the dinosaurs. 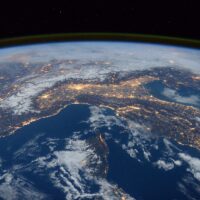