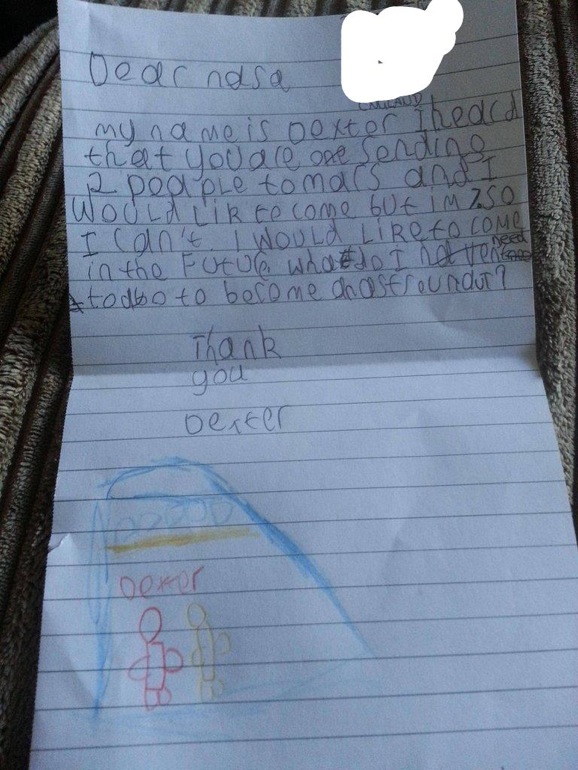 Remember how amazing the idea of space travel was when you were a kid? Don’t get me wrong, it still totally boggles my mind how cool it is, but somewhere along the line we grew up, and some of the magic wore off. It’s bizarre to think that could ever happen, but it did. I am totally stoked, however, to see that the sense of awe and wonder regarding outerspace isn’t entirely lost on younger generations. A seven-year-old boy recently wrote to NASA asking about breaking the bonds of our atmosphere, and much to his surprise, they wrote back.

A young boy named Dexter sent a letter to everyone’s favorite space agency, lamenting the fact that he is only seven, and far too young to go into space right now. He then asks for some helpful tips about how he could become an astronaut in the future. At the bottom of the page, he also includes a small drawing, presumably of him and a fellow space traveler, floating safely inside of a space capsule.

NASA, which according to one spokesperson responds to hundreds of thousands of letters and requests each year, wrote him back. Their answer contains links to some of the agency’s youth education programs, as well as links to Space Camps and job listings at NASA. 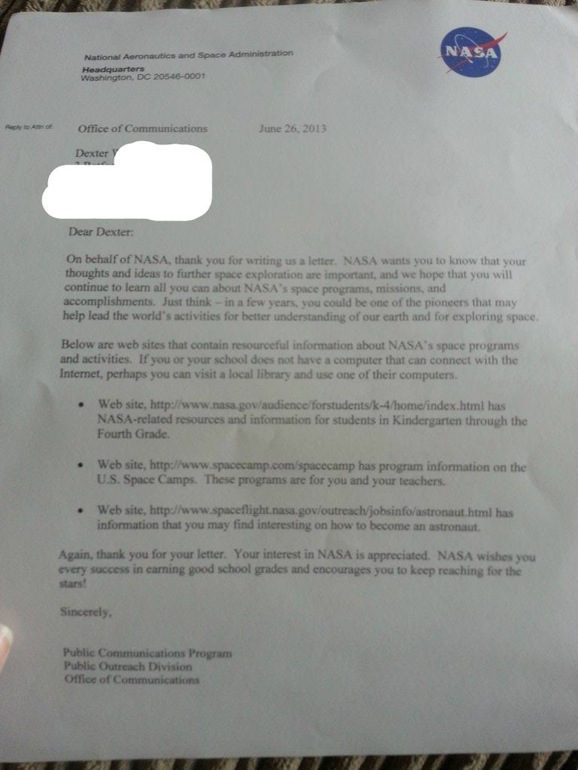 Not only is Dexter’s letter totally adorable, it’s even better that he received a reply. His mom says opening the letter was like Christmas morning. How fun would it be to open a letter from NASA? There is one minor hitch in Dexter’s plan. He lives in England. His NASA letter was inspired by a family visit to the Kennedy Space Center. But he’s not going to let that hold him back. Bolstered by his first letter, Dexter is hard at work composing a similar dispatch for the European Space Agency. Perhaps they don’t have such restrictive age limits on their space flights.

This is heartening, not just because it’s a cute human-interest story, but because it gives me hope that the younger generations still give a half a shit about space exploration. With recent government cutbacks, the future has seen better days. But as long little kids still look up at the stars and dream about floating weightless inside a cramped metal tube, there is still hope.

There’s a good chance Dexter will outgrow his interest in space. After all, it’s one of the phases that most little boys go through, like dinosaurs and World War II airplanes. Still, for all of us that move on to other things, there are some that don’t. The kid who grew up in the house next to mine never lost his desire to fly, went to the Air Force Academy, and is currently a commercial pilot. So who knows, maybe we’ll see Dexter become the first person to walk on Mars.

In an email, a rep wrote, “NASA is working to send humans farther into space than ever before, first to an asteroid and on to Mars, and perhaps one of these young writers will be among the first astronauts to set foot on another planet.”

For his interest, NASA sent Dexter received some nice swag, including a bunch of color pictures of Mars, and the Curiosity Rover, as well as a sticker and bookmark.