All of these theories are on the table when it comes to the mysterious rock that has appeared on Mars. When scientists working with the Mars Opportunity Rover compared two photos — one taken in late December and one on January 8 — they noticed the rock, which apparently appeared right in front of the rover at some point within a 12-day window.

The rover’s lead scientist, Steve Squyres, announced the finding at a 10-year anniversary event hosted by NASA’s Jet Propulsion Laboratory, celebrating a decade of roving on the red planet: “It’s about the size of a jelly doughnut. It was a total surprise, we were like ‘wait a second, that wasn’t there before, it can’t be right. Oh my god! It wasn’t there before!’ We were absolutely startled.” NASA has named the rock “Pinnacle Island,” noted that the origin of the rock “has been the target of much speculation,” and promised that it would be the “target of considerable investigation over the next few days.” Scientists believe that the jelly-donut-shaped rock is resting upside down, which means that we either get a rare glimpse of the underside of a Mars rock or that Opportunity moved and flipped the rock over at some point when it was roving about. That theory seems a bit more likely than the possibility of a meteorite impact right at Opportunity’s feet, or that “there’s a smoking hole in the ground somewhere nearby and this is a piece of crater ejecta,” but no one knows for sure. In the past few days, scientists have learned a bit more about the mysterious rock. According to color imaging, the rock appears to have not just the size and shape, but also the color of a jelly donut: “It’s white around the outside, in the middle there’s kind of a low spot that’s dark red,” says Squyres. That red spot isn’t jelly — in fact, it’s something much stranger (and probably far less tasty). The red portion of the rock is loaded with sulfur and magnesium, far more than any other samples the team has ever seen on Mars.

They don’t know what that finding means, exactly, but the scientists are apparently enjoying the drama. According to Squyres, “We’re completely confused, we’re having a wonderful time.” I don’t know how many scientists are willing to entertain the idea that a mischievous Martian put the rock there and is now watching the ensuing livestream on the equivalent of a Mars YouTube channel, but I think it’d be foolish to discount that possibility. 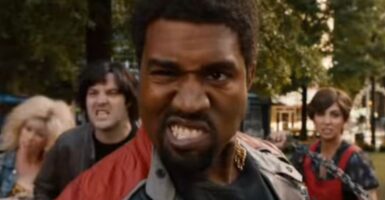