In this picture Mars appears to be wearing a hat, only a cold hat, one that will do nothing to keep your head warm. This is not hat at all, rather a photograph of the polar ice cap that covers the northern most reaches of the Red Planet.

The image is a mosaic compiled from 57 individual stills taken by the European Space Agency’s Mars Express Orbiter. Captured by a high-resolution stereo camera, the pieces of this puzzle were selected from those taken throughout the craft’s mission, soaring over the poles at an altitude of between 300 and 500 km. And it just so happens that we’re celebrating the tenth anniversary of the launch this year, so, party.

With a diameter of more than 1000 km, scientists now know that it is more than two km thick, thanks to the ground-penetrating radar aboard Express. Each winter the ice cap grows between 1.5 and 2 m, and those tiers and layers are the result of seasonal melting and Martian space dust then refreezing into the ice. And that cool swirling spiral motif that you see in this picture, are the troughs cut into the ice by strong, forceful winds.

The ice that’s made up of water is also actually covered by a layer of ice comprised of carbon dioxide. When the summer months roll around, and the temperatures increase, and this covering—which is mere centimeters thick—vaporizes and disperses into the atmosphere.

Here’s a documentary about Mars if you have some time to kill. 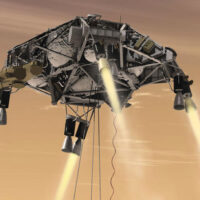