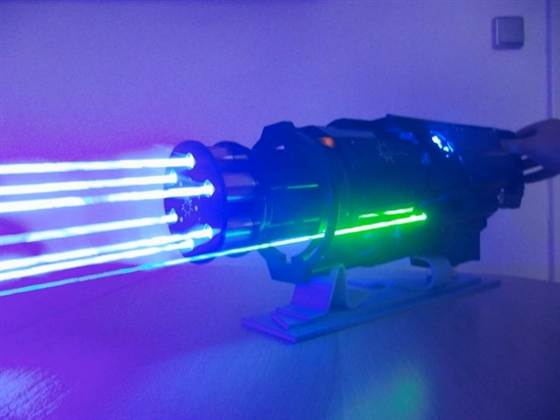 Imagine this: two arch-nemeses face off, one packing an anti-matter gun, the other armed with a six-laser Gatling gun. In the spirit of the Old West, they walk ten paces away from each other, turn, and have at it. Who wins?

The answer: everyone. Because this scenario could now actually happen.

We already have a desktop anti-matter gun, and now, Patrick Priebe, founder of Laser Gadgets, has created a prototype laser Gatling gun. Priebe encased six blue Spyder 3 Arctic lasers (a class-four laser that can start fires across a room, and whose beam is bright enough to be seen from space) and one green aiming laser in a futuristic shell that looks more like a small rocket launcher than a gun.

Unlike the original Gatling gun, and its Vulcan cannon descendants, the rotating cylinder containing the six blue lasers doesn’t have any function other than looking damn cool, especially since lasers are most effective when focused on a single point. Still, this gun is no joke, as Priebe demonstrates when he shoots the shit out of some balloons.

These all sound like great ideas. Is there a vetting process, a waiting period? Can any crazy asshole walk in off the street and buy a laser? Laser Gadget’s disclaimer does contain an over-18 clause, and makes customers promise that they “know the potential hazards in using high power lasers and high voltages!” In addition to that, you must swear to wear eye protection, prevent electrostatic discharge, and never to operate the device around bystanders. They may even have to cross their heart. You also have to agree that Laser Gadget isn’t liable for any mishaps, and you better be sure about your purchase, because there are no refunds or warranties. Good call on that one.

While that disclaimer technically prevents reenacting scenes from Terminator 2 and Fallout 3, I bet Priebe sees a rise in sales. And, if he’s lucky, a rise in robot customers.