Now this is just getting dopey! Last week, White House officials responded to a citizen’s request to build a real, working Death Star. The online White House petition gained the required 25,000 signatures to be placed into the Obama Administration’s consideration, so, satirical or not, the White House gave it the once-over.

The White House response was appropriately cheeky, pointing out that it would be unproductive to build a space station with a weakness that could be exploited by a single starfighter. Now things have gotten even more complicated, thanks to an official statement direct from the “Galactic Empire” calling out the White House for “cowardice.”

Straight from StarWars.com, a response entitled “Planet Earth Abandons Death Star Project in Face of Superior Galactic Imperial Power” just makes the Galactic Empire look so, so petty. Is this how Emperor Palpatine gained power in a fictional universe, by bullying a smaller republic? The response goes on to say that, even if we did build a real, working Death Star, we wouldn’t know what to do with it.

‘It is doubtless that such a technological terror in the hands of so primitive a world would be used to upset the peace and sanctity of the citizens of the Galactic Empire,’ said Governor Wilhuff Tarkin of the Outer Rim Territories. ‘Such destructive power can only be wielded to protect and defend by so enlightened a leader as Emperor Palpatine.’

That’s just a cheap shot! The Galactic Empire claims there are no weaknesses with its giant battle station, even though there were two movies — Star Wars and The Return of the Jedi — that perfectly illustrated just how to destroy a Death Star.

Emissaries of the Emperor also caution any seditious elements within the Galactic Senate not to believe Earth’s exaggerated claims of there being a weakness in the Death Star design. ‘Any attacks made upon such a station — should one ever be built — would be a useless gesture,’ added Motti.

If there’s one thing the Star Wars saga has taught anyone, it’s that the Galactic Empire ought to watch out for seemingly insignificant threats…

Read the complete statement on StarWars.com. 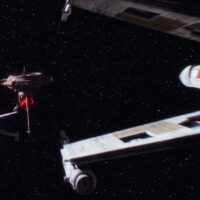