When you hear the words, “A Florida woman saw…” the possibilities are nearly endless on what could theoretically come next. The state has its share of attractions and it also has its share of stories. So knowing what a random woman saw there could really cover the gamut. But of all the guesses you could take, one of the last ones would be, a baby dinosaur. Though that appears to be the case with a recent video making its rounds on social media. It sure looks like something prehistoric running past a house security camera.

The video in question was shared by the appropriately-named Twitter handle @ChrisLikesDinos and was first reported by Fox35 in Florida. It’s grainy black-and-white footage at nighttime on the camera, but the image will definitely make you do more than a couple of double-takes when you first see it. I’m no paleontologist, but it sure does look like the Florida woman caught something prehistoric scampering past her patio. Take a look at what I mean:

Look, there are a lot of ways this could go and there are many options outside of thinking this Florida woman just happens to live adjacent to Jurassic Park and there was a security breach on those grounds. Some online folks started throwing out the different possibilities and all can kind of make sense when considered on an individual level. It could have been a fox with a bushy tail that made it appear that there was a dinosaur tail trailing. Maybe it was a dog with a leash behind it. Some threw out the possibility of a larger bird from the region. All sort of make sense and assume the camera lighting played tricks on the eyes.

If you think that a Florida woman seeing a baby dinosaur sprinting through her backyard was the weirdest thing you’ve heard in a while, then you simply haven’t been trying hard enough when it comes to your news reading. This is practically tame compared to what we’ve been dealt with for the past year or so. Even recently there have been massive snakes hanging out in public parks, UFO sightings out the wazoo, monkeys playing video games with their minds, metallic monuments appearing out of nowhere in the desert (remember those?), and much, much more. We live in crazy times.

And speaking of Jurassic Park, while this Florida woman might not have an actual dinosaur amusement park in her general vicinity, there has been recent talk of something like this actually being a possibility. Elon Musk’s business partner and Nueralink founder Max Hodak actually came out and said that making the actual park with crazy, never heard of genetically modified species could be close to reality. Maybe they already did it and one escaped. I’d believe anything these days.

I suppose time will tell if what this Florida woman actually saw was a dinosaur. My guess is no, but I’m a pessimist when it comes to extinct creatures coming back to life and terrorizing the suburbs. That’s just me though. It very well could be a sign that dinosaurs still march among us. And they might even live in a neighborhood near you. 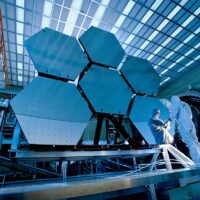