If you thought the weirdness of 2020 had a chance of ebbing into more normality as we entered 2021, think again. Because now scientists think they’ve found proof and evidence of another dimension. Yup, I know this sounds like a sci-fi movie opening in which a group of energetic and inquisitive brainiacs thinks they’ve made some groundbreaking discovery only to have all forms of evil appear through the portal. It’s not quite that level of scary, but it’s definitely cool and could begin solving some serious questions about our universe.

Look, maybe this isn’t as in your face as certain UFO sightings have been lately, with those things coming in a fast and furious kind of way. But the possibility of another dimension existing has been *floating* around for decades now and it’s close to having some confirmation. Essentially what scientists are referencing in some recent studies is how dark matter and its properties exist within the framework of our current universe. And those findings suggest there is something else going on out there, with another possible reality.

What scientists are searching for is classified as a WED or Warped Extra Dimension. In (hopefully) layman’s terms, they are studying the idea of dark matter which is something of a scientific catch-all for matter with undefined properties that can help explain some theories like that of gravity. Basically, dark matter can’t be detected, but scientists “know” it is “there” because of the effects it has on objects. Its detection is through how its gravitational force affects other things.

But this latest study, pioneered by scientists from the PRISMA+ Cluster of Excellence at Johannes Gutenberg University Mainz, has found some evidence that fermions (subatomic particles) may be moving into a fifth dimension and becoming akin to dark matter relics. This can only be explained by the particles moving out of our current dimension and into another. The process would happen “out of sight” of conventional scientific observation but would explain dark matter masses because it happens in another dimension and then moves to ours.

For the time being, this kind of science is still fairly theoretical. It was first posited in the Randall-Sundrum model and is based on warped geometry. This allows for the possibility of extra dimensions to explain gravitational pulls and other “rules” wherein dark matter is factored into the equation. It’s far from a proven theory though and has created more than a little speculation about the possibility.

For now, I don’t think we need to be all that concerned about monsters or other beings of pure and terrifying evil crawling their way out of a portal to the fifth dimension. Considering that scientists haven’t ever seen such a thing yet there’s probably still a little bit of a runway until a Demogorgon appears in our little town and threatens the stability of our small Dungeons & Dragons party. But maybe that day is coming with scientists clearly getting closer to understanding dark matter as an actual thing. We can’t “see” it yet, but there’s clearly something there. 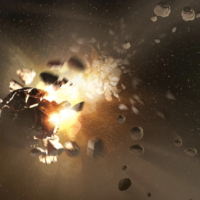