The IRS isn’t an organization that anyone would call “well respected for what they do with money,” so it’s no surprise that they’re apologizing for something that they’ve done with money. Specifically, for shitting on both taxpayers and Star Trek, all in the same squat.

In 2010, the IRS produced a training video that parodied Star Trek in order to bore the ever-living shit out of people. It isn’t even a parody, really, as the only thing bordering on trivialization is mimicking Spock’s character while using costumes that more closely resemble those worn in The Next Generation. Way to stick it to them!

In any case, the costume-filled video also showcases an elaborate control room set full of lit-up displays and special chairs that cost around $60,000 in taxpayer money to produce. Not to mention having such a large cast to begin with. You could mash all of these people together and still only get the acting skills of two high school students. And one of them is the captain, who is kind of interesting, in the way that anything in an IRS training video can qualify as interesting. Watch the video below and remember that Stardate April 15th is just around the corner.

The IRS is now admitting that the entire project, which also included a Gilligan’s Island parody, was a mistake, after the video took off across the Internet following CBS News obtaining the video under the Freedom of Information act.

“The IRS recognizes and takes seriously our obligation to be good stewards of government resources and taxpayer dollars,” the agency said in a prepared statement. “There is no mistaking that this video did not reflect the best stewardship of resources…A video of this type would not be made today.”

This was only three years ago, and I seriously doubt the IRS has learned a wealth of knowledge about moderation and sensible spending in that time. After all, they haven’t yet contacted me to abort my newly begun smear campaign against them. Hint hint. 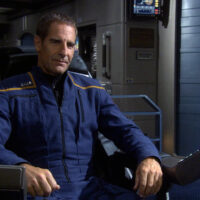