Oh, DARPA. You’re the best when it comes to ground-breaking new robot stuff!

DARPA’s Robotics Challenge (DRC) was designed to motivate teams to develop disaster-mitigation and recovery robots — a particularly important development given recent concern about robots doing just the opposite.

Effective disaster response robots require not only the hardware that allows them to maneuver in thorny situations, but also the software that allows them to communicate with human operators, manipulate tools, and navigate and interact with their surroundings. In the DRC’s first event, the Virtual Robotics Challenge (VRC), which took place from Jun 17-21, 2013, teams designed and applied their software to a simulated robot. The VRC’s cloud-based competition tested teams’ abilities to guide the simulated robot through a series of challenging tasks, including driving a utility vehicle, maintaining balance and control while navigating difficult terrain, and attaching and turning on a fire hose.

Twenty-six teams competed, and seven advanced to the next round, in which they’ll be given an Atlas, a nearly six-foot-tall, 240-pound robot developed by Boston Dynamics. The teams will also receive additional funding to use their software in conjunction with the Atlas robot in preparation for the December 2013 DRC trials, which will require disaster response operations such as driving a utility vehicle, walking across rubble, moving debris, opening doors, climbing a ladder, using a power tool (This is the one I’m most excited to see. Robots + power tools = infinite geekery), and closing a leaking pipe valve. The highest scorers at the trial will compete in another, more difficult obstacle course in late 2014, with a grand prize of $2 million on the line.

While we’ll have to wait and see what innovations DRC inspires, cutting-edge ROS (Robot Operating System) software is already available. Gazebo, DARPA-funded simulation software, was provided to every DRC team for use in the June 2013 qualifying rounds. It’s also free to download, as is a virtual model of the Atlas robot. In fact, according to Popular Science, “Everything those teams had access to, and everything they had to overcome, from the dimensions and compliance of the seat those virtual Atlases had to scramble into, in order to drive a utility vehicle across the course, to the friction property of the robots’ hands as they gripped the steering wheel, is fully available.”

The point of Gazebo — beyond effectively controlling robots, of course — is for labs to compare and share results and codes. DARPA ultimately wants to promote robotics research and development, especially when it comes to designing software that facilitates robot recovery and mitigation missions.

Me, I’m looking forward to a DARPA competition for robotic bloggers, a whole new spin on disaster relief. 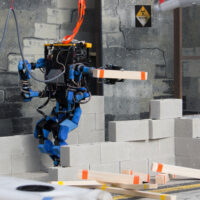 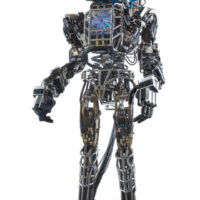 DARPA Robot Can Navigate Obstacles, Bringing Us One Step Closer To Our Inevitable Doom