Curiosity’s Tracks As Viewed From Space

One of the coolest aspects about the Curiosity rover’s mission to Mars has to be its close cooperation with one of NASA’s other Mars projects, the Mars Reconnaissance Orbiter. MRO was re-purposed for Curiosity’s landing in order to give a stunning shot of the rover parachuting down to Gale crater, and now it’s giving us even more shots of the Mini-Cooper sized laboratory roving around the surface of the red planet. 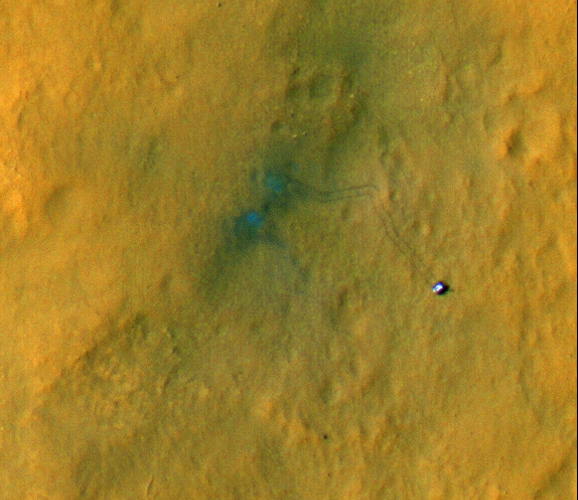 In the recently released picture above you can actually see Curiosity’s tire tracks after it traveled the first 357 ft. of its long odyssey on Mars. The image was taken with MRO’s HiRISE camera, the largest telescope yet sent on a deep-space mission and capable of resolving an image below a meter across. In addition to the image of the rover, MRO also sent back two other pictures of both the parachute shell on the surface and the impact scar of Curiosity’s descent stage.

So what was Curiosity doing while it was getting glamour shots from MRO’s HiRISE camera? After the initial mobility tests were done, the team at NASA JPL started testing and preparing the rover’s arm for operation. The arm will be responsible for taking all the samples from the Martian surface and depositing them into the separate laboratories on its back. Taken with its own mast cam, the rover just sent back this awesome picture of this impressive piece of hardware set against the Martian horizon. 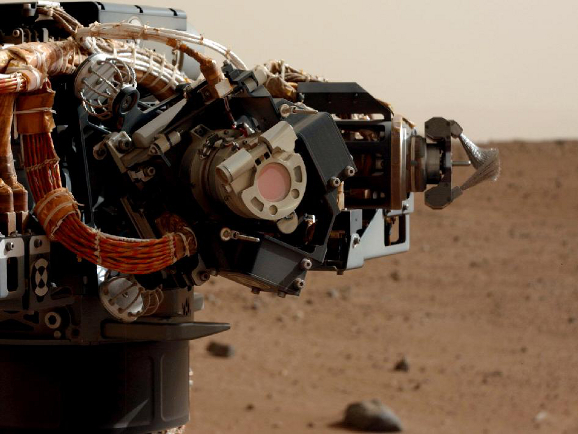 This image wows me more than anything else that has come out of Curiosity so far. It’s not a shot of the ground underneath the rover, or a generic Mars-scape. This is a craft built by humans sitting on another planet, just casually checking itself out with Mars as a background. I don’t think we’ve really seen anything yet that says, “Yeah, I’m on Mars” more than this pic.