In the latest “Holy crap, look at this awesome picture Curiosity took” news, the rover has managed to capture a solar eclipse on Mars. It’s not quite as impressive as one of ours, but it’s still a pretty awesome for being what it is, a picture of an eclipse on an alien world. 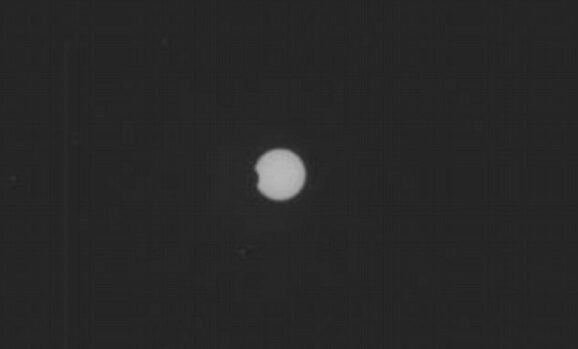 The eclipse was captured at 1/1000th of the sun’s intensity to keep it from damaging the Curiosity’s mast cam. The rover actually captured hundreds of pictures of the transit which could be condensed into a short video of the transit, but because of bandwidth restrictions it will probably take a while for that to be put together. The moon in question is Mars’s oddball satellite Phobos, the lumpy potato-shaped slab of rock that scientists believe is most likely a captured asteroid rather than a relic of the planet’s formation or a leftover from a planetary impact like the accepted origin of our own moon. In the next several days Curiosity will be able to capture more solar transits of both Phobos and the smaller Martian moon, Deimos, so expect more pics of Martian eclipses soon.

The first Martian eclipse we ever recorded was actually captured indirectly back in 1999 by the Mars Global Surveyor. In the images released of the indirect viewing, you can see the oval shadow of Phobos in the middle of an imaged area that is roughly 250 km across. The image is still impressive, though not as cool as seeing the eclipse directly. 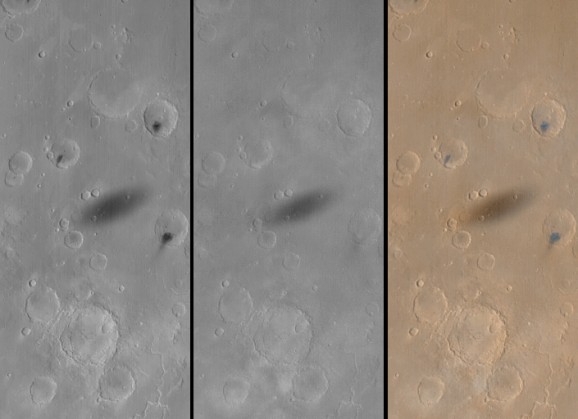 Since most of the “eclipse” images we get from spacecraft are all products of the craft’s orbit rather than the actual orbital mechanics of the moons or planets in question, this makes for a pretty unique picture from another planet. Looking at the tiny oblong chunk of the Martian eclipse also illustrates just how lucky we are to have a moon big enough and the right distance from our planet to give us the spectacular views that we get of solar eclipses here on Earth. I’m sure that if there were any intelligent Martians they would choose to vacation on our planet to catch a glimpse of the amazing ring of fire that happens when our eclipses reach totality. Just more evidence for what an awesome place the planet Earth is.