These Chinese Drones Have A Package For You Because we live in the future, SF Express, a Chinese courier company, has recently started using drones to deliver packages. The company quietly began giving the drones a trial run in Dongguang city, and it didn’t take long for news and photos to appear on Weibo, a Chinese social media site akin to Twitter.

The drones have eight rotors attached to eight limbs and can carry packages of up to 6.6 pounds up to elevations of 330 feet. They come equipped with a navigation system that, much like a standard GPS, requires the destination address and chosen flight path. This system enables users to monitor the drone’s progress to be sure it’s headed to the right place, and to correct its course if it isn’t. SF Express hasn’t released information about the battery life of the drones, or about when the trials will be completed. The company believes that the drones could be an efficient and economical way of delivering packages to remote areas, and could help cut down on pollution and traffic problems. Best of all, the drones don’t expect tips—unless some savvy engineer programs them to do so. The drones are very similar to those used by a Shanghai bakery, but unfortunately for them they didn’t get approval from authorities and had to stop using the drones. There’s a lot of that going around, it seems. Even Domino’s has gotten onboard the drone delivery train, using its DomiCopter to replace pizza delivery boys in the UK. The UK has also begun employing drones as waiters at a popular sushi chain, and restaurants in Japan, China, Thailand, South Korea, and Hong Kong have employed robot waiters for a while now. The Burrito Bomber, currently in limbo due to the lack of FAA guidelines, will hopefully be bombarding hungry folks with Mexican food starting in 2015.

SF Express received the Chinese government’s blessing to begin their experiment and is complying with all aviation regulations. This distinguishes China from countries such as the U.S., where the FAA isn’t expected to release rules governing commercial drones for years. Thus, the use of commercial drones in the U.S. is on hold until at least 2015. The FAA did, however, approve two commercial drone operations this August for Boeing and AeroVironment Inc., but it’s unclear what kind of regulations they’ll draft, especially for smaller, cheaper drones. Among other things, questions about the legality of law enforcement surveillance drones make this a hot-button issue. Still, the FAA predicts that by 2020, approximately 30,000 drones will be taking to the air in the U.S. As long as they’re feeding me or bringing me packages, I’m all for it, though I’m holding out for the “singing telegram” drone. 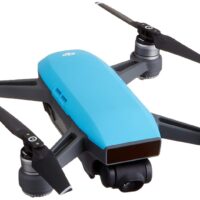 The Best Drones For Beginners: Get Started Shopping Here