Scientists have long placed monkeys at the forefront of our scientific discoveries – being launched into space years before the first human, controlling robot arms through brain implants, having their heads transplated onto each other’s bodies – and now i09 is calling attention to the latest ape-aided technological breakthrough. It seems that researchers at Duke University have developed a brain-machine-brain interface (BMBI) that allows monkeys to both control a virtual hand and receive information that the brain interprets as the experience of feeling the virtual object. It’s our first step toward true, full-sensory augmented reality experiences.

This BMBI is similar to other virtual interfaces, in that it translates commands from the monkey’s motor cortex into control of a virtual hand. Where it breaks out into new territory is that the feedback to the monkey’s brain stimulates the actual neurons responsible for the sense of touch in the hand. Imagine playing a video game and being able to distinguish between the feel of a gun and a bow, or tell whether a metal door is hot by touching it.

This isn’t just another mile marker on the road to Brainstorm-style totally immersive virtual entertainment experiences, though. The technology has incredible potential in improving life quality and mobility for people with disabilities. The researchers hope that the technology will not only allow quadriplegics to move limbs and walk again, but actually experience the textures of the items they are touching and the ground on which they are walking.

Of course, there’s also the possibility we’re just giving our non-human primate friends more and more tools with which to create the inevitable Planet of the Apes. Science is a fickle mistress that way. 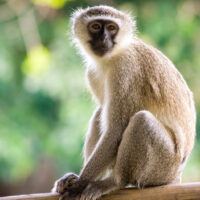