Astronomers May Have Found A Planet Habitable For Humans

Pack your bags and fire up the warp drive.

Astronomers have re-considered the possibilities of two exoplanets orbiting the red dwarf known as Gliese 581. They believe there’s a chance that these worlds may have properties for human habitability. These would-be “second and third Earths” are only 20 light years outside of our solar system and could be targets for a potential interstellar space mission, some day.

Gliese 581 has six planets in its orbit. Scientists say two of those planets are in the “habitable zone,” which means their water could be in liquid-form and their temperatures could be friendly to humans. One of the planets, known as Gilese 581g, receives about the same amount of sunlight as Earth and is 1.5 the size of our world. It’s also “tidal locked,” which means it doesn’t rotate. So one side always faces its sun while the other side remains in darkness.

The planet Gilese 581g was discovered by Lick-Carnegie Exoplanet survey in 2010 and was re-added to the top five exoplanets considered prime candidates for harboring of life. As Abel Torres of Planetary Habitability Laboratory points out…

These factors combine to make Gliese 581g the most Earth-like planet known with an Earth Similarity Index, a measure of Earth-likeness from zero to one, of 0.92 and higher than the previously top candidate Gliese 667Cc, discovered last year.

The placement of Gliese 581’s planets has led astronomers to also theorize that three more of its planets could be habitable to life. This makes five out of the six of Gliese 581’s planets habitable, but only two would be habitable specifically for human life. Still, this news is pretty exciting that sooner or later we will find a planet that is a lot like Earth. Our stay in the universe may be about to get less lonely. 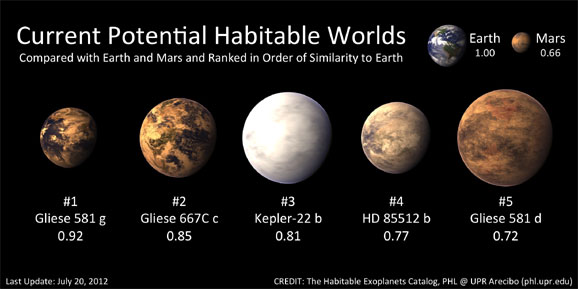