An Astronaut Writes From The International Space Station After September 11, 2001

The events of September 11, 2001 are still being felt, these 11 years later. Even for those of us who weren’t directly affected by the deaths of friends or families, there can be no question that the attacks shook our country in a way that hadn’t been felt since the Pearl Harbor attack that launched us into World War II. I remember that the sense of shock and fear that permeated the days after the attack was accompanied by a profound sense of community, a sense that we were all one people, in it together, that sadly faded quickly. But while we were all clinging to loved ones and strangers alike, there was one group of people who had an entirely unique viewpoint on the attacks and their aftermath: the astronauts and cosmonauts orbiting overhead in the International Space Station. 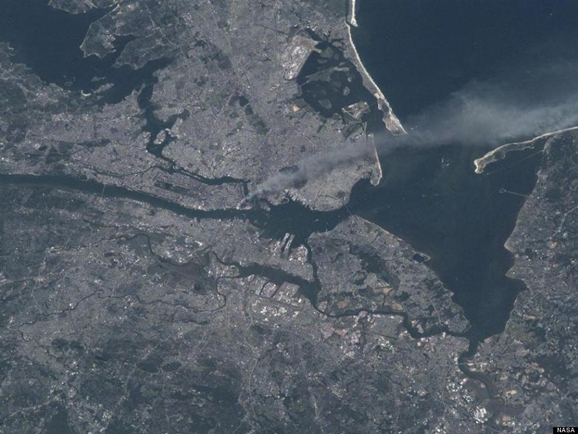 That remarkable picture was taken on September 11, 2001, by the only American not on the planet Earth at the time. Expedition Three Commander Frank L. Culbertson was stationed on the ISS, along with Russian cosmonauts Mikhail Tyurin and Vladimir Dezhurov. In honor of the tragedy’s anniversary, NASA has released a series of letters written by Culbertson in the days after the September 11th attacks. They present a gripping and emotional story of an American experiencing many of the same feelings we all did, but coupled with intense feeling of isolation and disconnectedness. Here is the full text of Culbertson’s first letter, written on September 12th.

I haven’t written very much about specifics of this mission during the month I’ve been here, mainly for two reasons: the first being that there has been very little time to do that kind of writing, and secondly because I’m not sure how comfortable I am sharing thoughts I share with family and friends with the rest of the world.

Well, obviously the world changed today. What I say or do is very minor compared to the significance of what happened to our country today when it was attacked by …. by whom? Terrorists is all we know, I guess. Hard to know at whom to direct our anger and fear…

I had just finished a number of tasks this morning, the most time-consuming being the physical exams of all crew members. In a private conversation following that, the flight surgeon told me they were having a very bad day on the ground. I had no idea…

He described the situation to me as best he knew it at ~0900 CDT. I was flabbergasted, then horrified. My first thought was that this wasn’t a real conversation, that I was still listening to one of my Tom Clancy tapes. It just didn’t seem possible on this scale in our country. I couldn’t even imagine the particulars, even before the news of further destruction began coming in.

Vladimir came over pretty quickly, sensing that something very serious was being discussed. I waved Michael into the module as well. They were also amazed and stunned. After we signed off, I tried to explain to Vladimir and Michael as best I could the potential magnitude of this act of terror in downtown Manhattan and at the Pentagon. They clearly understood and were very sympathetic.

I glanced at the World Map on the computer to see where over the world we were and noticed that we were coming southeast out of Canada and would be passing over New England in a few minutes. I zipped around the station until I found a window that would give me a view of NYC and grabbed the nearest camera. It happened to be a video camera, and I was looking south from the window of Michael’s cabin.

The smoke seemed to have an odd bloom to it at the base of the column that was streaming south of the city. After reading one of the news articles we just received, I believe we were looking at NY around the time of, or shortly after, the collapse of the second tower. How horrible…

I panned the camera all along the East Coast to the south to see if I could see any other smoke around Washington, or anywhere else, but nothing was visible.

It was pretty difficult to think about work after that, though we had some to do, but on the next orbit we crossed the US further south. All three of us were working one or two cameras to try to get views of New York or Washington. There was haze over Washington, but no specific source could be seen. It all looked incredible from two to three hundred miles away. I can’t imagine the tragic scenes on the ground.

Other than the emotional impact of our country being attacked and thousands of our citizens and maybe some friends being killed, the most overwhelming feeling being where I am is one of isolation.

You can read the rest of Culbertson’s letters on NASA’s website.