A new rumor suggests that the Teenage Mutant Ninja Turtles are crossing over with the world’s most popular battle royale video game, Fortnite. The rumor was sparked by the signed cooperation between Fortnite developer Epic Games and Paramount Pictures Corporation — meaning that other properties, such as Star Trek or even SpongeBob, might find their way to the battle island. Since we’re discussing a rumor, the details about the TMNT and Fortnite crossover are basically non-existent, but this wouldn’t be the first time the Turtles have appeared in an online game that’s not directly about them.

According to Comic Book, XboxEra’s host Nick “Shpeshal Nick” Baker revealed that a source told him that Paramount had signed a deal with Epic to bring its properties to Fortnite. More specifically, the main property Baker heard about was the Teenage Mutant Ninja Turtles — four humanoid tortoises with over-the-top ninja skills. Of course, nothing has been officially confirmed, and Fortnite-related rumors regarding crossovers often go awry or simply take a long time to implement in the game. Spider-Man and Naruto were rumored months before actually appearing in Fortnite, and the purported The Matrix collaboration ended up as nothing more than a few emotes and a free Sentinel glider.

With that said, a large portion of crossover rumors ultimately end up being true. Additionally, while Baker specifically references Paramount Pictures, it’s entirely possible that ViacomCBS, Paramount’s parent company, has a hand in this. ViacomCBS owns Nickelodeon, Paramount+, and rights to the Teenage Mutant Ninja Turtles franchise. However, without an official statement by the company and/or any of its subsidiaries and parties involved, claiming with certainty that the Turtles and Fortnite crossover is a done deal simply wouldn’t be true.

Given how ViacomCBS owns Paramount, which in turn own Nickelodeon, the possible future crossovers with Fortnite may extend beyond Teenage Mutant Ninja Turtles and include Avatar: The Last Airbender and Legend of Korra, Jimmy Neutron, and even SpongeBob SquarePants. A Squidward running around the island with an assault rifle is a concept too ridiculous to miss out on, so Epic and Paramount should really consider adding SpongeBob characters. In contrast and more on the adult-oriented and incredibly violent side, Doom Eternal’s Doom Slayer (aka Doom Guy) was also rumored to appear just recently, so he might make an appearance next to Michelangelo, Donatello, Raphael, and Leonardo in Fortnite, which is getting a No-Build mode.

Teenage Mutant Ninja Turtles is an entertainment franchise centered on four anthropomorphic turtle brothers trained in martial arts who fight evil in New York. It began as a comic book in 1983 and grew into a super-successful animated series by 1987, which ran for almost a decade before Nickelodeon purchased the franchise on behalf of Viacom in 2009. Viacom commissioned an entirely new comic book series, two new live-action films, and two animated series, which ran between 2012-2017, and 2018-2020, respectively. Considering that the Turtles had four animated series, each with its distinct art, Epic Games has a broad choice of skin varieties for the rumored Teenage Mutant Ninja Turtles x Fortnite crossover. 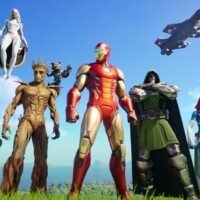