WB Games Montreal, a gaming studio credited with Mortal Kombat 11, and Warner Bros. Games, a studio that announced the upcoming Wonder Woman game, have finally released a new gameplay launch trailer for the upcoming Gotham Knights. The new trailer was dropped just weeks before the game’s scheduled release and showcases combat, vehicular and villainous aspects of the upcoming game. Luckily, fans of the Batfamily won’t have to wait long before they can try out this action themselves, as the game launches in two weeks.

The new trailer for Gotham Knights features gameplay footage and in-game cutscenes of its protagonists, taking out the game’s numerous villains. If you’re interested to see Batgirl, Nightwing, Red Hood, and Robin taking out the likes of Mr. Freeze, Harley Quinn, Clayface, and the Court of Owls, check out the trailer embedded above. Littered with action, some of the biggest highlights seem to be enemy takedowns — which look very similar to Batman: Arkham Knight — and online cooperative gameplay mode, in case you and your friends decide to adorn your favorite capes.

The game’s official synopsis revolves around Batman not being around (pun not intended) and Batfamily having to take up their fists, guns, and batons in an attempt to stop the new, expansive criminal underworld from taking over Gotham. With the Caped Crusader now dead, it’s up to players to assume the role of one of the Knights and bring hope to Gotham’s citizens, discipline to its cops, and fear to its criminals. Besides epic smackdowns, those who take up their controllers in Gotham’s defense will have plenty of mystery to solve and uncover some of Gotham’s darkest secrets.

From what we previously learned, the upcoming Gotham Knights won’t follow the traditional RPG elements, in which players start at square one and increase their combat capabilities as they progress through the game. Instead, WB Games decided to make the members of the Batfamily into fully capable crime fighters at the very start of the game. That’s not to say that the upcoming game won’t have any character progression; instead of a traditional approach, the protagonists will further hone their skills into their unique fighting style that differs from Batman’s.

Gotham Knights’ previously released trailer showcased some of the upcoming game’s numerous villains, ranging from lesser-known bad guys to some of the universe’s most famous villains, including Professor Pyg, Clayface, Harley, Freeze, Nigma, etc. The fan-favorite Joker apparently won’t make the cut, despite the game teasing a shadow figure in a purple fraque. As things currently are, Gotham Knights is set to release on PlayStation 5, Xbox Series X/S, and PC on October 21, priced at $70 — a new AAA-game price range.

It’s worth noting that Gotham Knights was originally announced for the last-gen consoles, the discontinued Xbox One, and soon-to-be discontinued PS4; however, WB Games decided to halt the game’s development for said consoles. The studio failed to disclose the exact details pertaining to the cancelation on last-gen consoles, but cutting costs and resource reallocation is the most likeliest of reasons. 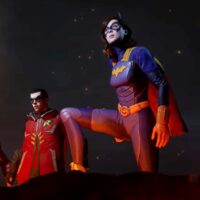