A YouTuber has remade Yharnam from Bloodborne in Minecraft.

Ever since its release more than a decade ago, Minecraft has become one of the world’s most popular gaming titles due to its creative options that allow gamers to build and explore the world to their hearts’ content. Of course, fans have used that opportunity to build some pretty fantastic stuff in Minecraft, and some of the things that we world that have been built in-game are incredibly massive. The most recent gaming recreation within Minecraft illustrates that point perfectly, as one gamer managed to recreate an entire gothic castle that resembles the one from Bloodborne.

According to IGN, Bloodborne — a massively popular RPG made by FromSoftware — is regarded as one of the most stunning video games of the past decade, and now, a YouTube and Reddit user Potomy recreated that beauty within Minecraft. One can now wander through the streets of Yharnam, the Astral Clocktower, Iosefka’s Clinic, and several other iconic locations from the game. According to Potomy, the Astral Clocktower took some five to six hours to complete, while Iosefka’s Clinic took a bit less.

These actually aren’t the only gothic-styled Bloodborne-inspired buildings that Potomy modeled in Minecraft; there are actually several other, more standard creations. The main idea behind these creations is to eventually assemble them together and fully recreate all of Yharnam. But the best is yet to come: Potomy actually plans to release the world map once the project is complete, and while there’s no exact release date attached to any of his statements, those interested in the project can monitor its development on Potomy’s numerous social media accounts.

Considering the scale of this Minecraft-Bloodborne recreation and other massive creations within Minecraft, it’s quite impressive what Minecraft players are capable of making within the game. In fact, the game’s Creative Mode is probably one of the game’s best-selling points and probably one of the best sandbox modes in all of gaming. Now, some might consider that an overstatement, but the numbers don’t lie; Minecraft is by far the best-selling game in game history, with over 238 million copies sold — nearly 70 million copies ahead of its runner-up, the GTA V.

For the vast majority of its gaming community, Minecraft is more than just a game. In fact, it’s a creative and artistic medium and a place to create art and large-scale worlds, ranging from recreations of Stargate or Hogwarts — which is getting its own game now — to the aforementioned recreations of Bloodborne‘s massive castle. The fans’ devotion to the renowned sandbox hasn’t waned after all these years, and the title has become a place for people to connect, create, and share incredible gaming experiences, and that’s what makes Minecraft a distinct gaming title.

As for Bloodborne, the game was released in 2015 to fantastic critical acclaim and has seemingly become more popular ever since. In all honesty, no one expected any less from the creators of the acclaimed Dark Souls series, whose most recent creation — the 2022’s Elden Ring — is considered the best-selling game of 2022 and has already won a GOTY (Game of the Year) award. 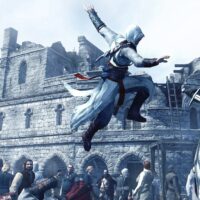