Zoe Saldana Will Star In A Pirates Movie

Zoe Saldana is going to get into a little pirate action sooner than later. But before you start picturing the swashbuckling, scarf-flowing escapades of one Captain Jack Sparrow and that bonkers franchise, think again. This latest movie from the actress is going to be anything but that lighthearted romp through the high seas. This movie for Saldana could be a grim and bloody affair, possibly more reminiscent of the actual time with bloodthirsty pirates and a looser grip on morality. Saldana is headed for a much darker pirate movie.

This latest news has it that the film, The Bluff, has a couple of key players already in place with an active plot though the script is yet to be finalized. It takes place in the 1800s and Zoe Saldana will play a woman in the Cayman Islands who needs to basically survive a group of bloodthirsty pirates who’ve descended on her home. Apparently, her character will be at the center of the action which could turn fairly bloody and graphic quickly. The goal seems to be shooting for historical accuracy around these groups of marauders rather than the Disney fare we’ve seen before.

Joining Zoe Saldana in The Bluff will be director Frank E. Flowers who actually hails from the Cayman Islands where the film is set to take place. His first, and only other, feature film was 2004’s Haven which also takes place on the island. That was a tense thriller involving an awesome cast. Part of the central story was the relationship between Saldana (they’ve worked together before) and Orlando Bloom. It’s good that he and Saldana have a working relationship, because that movie finished on the low end of things, sitting at 13% on Rotten Tomatoes.

Zoe Saldana meanwhile, is fresh off an awesome run in the Marvel Cinematic Universe playing Gamora in both Guardians of the Galaxy movies as well as Avengers: Infinity War and End Game. And she isn’t done with the big-budget mega-movies either. She’s set to reprise her role as Neytiri in the upcoming sequels for Avatar which are due out in the next couple of years.

There are a couple of other exciting projects coming up as well. She has a role in The Adam Project which is a time-traveling comedy/ drama from Shawn Levy. It stars Ryan Reynolds who goes back in time to save his younger self from an abusive father. Along with Zoe Saldana, Mark Ruffalo and Jennifer Garner also have roles. Additionally, she’s slated to be in a, yet untitled, David O. Russell project which has huge names like Margot Robbie, Christian Bale, and Rami Malek attached.

Before that though she will work with her husband Marco Perego Saldana on Keyhole Garden about immigration issues. It’s an exciting time for the talented actress and this next movie, The Bluff, could be a real harrowing tale. Zoe Saldana has as much in the works as any talent in Hollywood. This latest news though could be her bloodiest film yet. 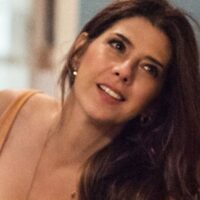