A Yellowstone Star Is Boycotting An Awards Show

As we enter television awards season with nominations from the typical outfits getting handed out, Yellowstone should be in the mix for a number of different accolades. With the series having recently wrapped up a wildly successful fourth season for Paramount, it’s set to make some podium rounds in the near future. But one star of the show won’t be joining along in all of the festivities. According to Variety (via CBR) Forrie J. Smith has said that he won’t be attending the Screen Actors Guild Awards because of his vaccination status. Originally he had posted this in an Instagram video, but that has since been deleted.

In the video, Smith talked about why he wouldn’t be attending the SAG Awards saying, “…I’m not vaccinated, and it’s a requirement to be vaccinated…I haven’t been vaccinated since I was a little kid…I never will. I believe they compromise your immunities… It’s just my beliefs… ” It is a requirement of the Screen Actor’s Guild Awards that all attendees show proof of Covid-19 vaccination, along with proof of a booster shot and also proof of a negative test within 48 hours of the ceremony. With all of these regulations around the show, Smith decided that it wasn’t for him and he wasn’t going to change his status in an effort to attend.

Though he apparently won’t be in attendance, plenty of other Yellowstone folks might be in the building. That’s because the show has been nominated for the award in Outstanding Performance by an Ensemble in a Drama Series. The Taylor Sheridan-led series centers on the Dutton family and their titular ranch along with all of the intrigue that surrounds owning the largest contiguous ranch in the United States. Among others who are part of the nominations for the SAGs is Kevin Costner as John Dutton, Kelly Reilly as Bethany Dutton, Wes Bentley as Jamie Dutton, Luke Grimes as Kayce Dutton, and Cole Hauser as Rip Wheeler. They, among many others, make up one of the most dynamic casts on television today. Smith plays Lloyd Pierce, a fiercely loyal ranch hand.

After a mostly successful run on Paramount for the first three seasons, Yellowstone really started reaching critical mass on its ratings for the fourth season. It averaged nearly eight million viewers per episode which was more than double what it did in season three and more than triple the first season. It’s seen massive growth and the franchise is only continuing to expand. In addition to the main series, there was a prequel show 1883 released last year which details the Dutton family making their way across the frontier to originally start the ranch.

And that’s not all because there’s another planned series 1932 which will pick up on the story in the next generation. Plus, another series 6666 is in the works which will take place in the current Yellowstone timeline but just at another ranch, likely one in Texas referenced by a couple of the ranch hands in an earlier season. This is all to say that Yellowstone is definitely one of the bigger franchises out there right now and will likely continue to rack up accolades. It’s just a shame that Smith won’t be in attendance for this one. 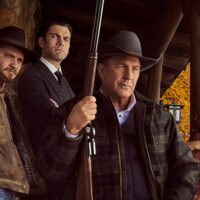