Will Smith and Michael B. Jordan Teaming Up For I Am Legend 2

Huge news is coming out of the moviemaking world at the start of the weekend. What could be bigger than Will Smith reprising the role of Robert Neville from I Am Legend? How about Michael B. Jordan of Black Panther and Creed fame joining him for I Am Legend 2? That should get people ready to demand ticket sellers take their money before the movie is even in production.

The news comes from Deadline, who notes that this will be the first time Will Smith and Michael B. Jordan team up for a major film as stars and producers. No plot details have been released and there is reportedly no director attached yet. However, Deadline says the Oscar-winning screenwriter Akiva Goldsman — who co-wrote the first film — is returning as a scribe on I Am Legend 2.

There’s a pretty big spoiler coming, so you may want to skip this paragraph if you haven’t seen or finished I Am Legend. Probably the biggest question on fans’ minds is exactly how this sequel will relate to the original film. The hero Will Smith plays doesn’t survive the events of I Am Legend, raising the question of how he could be in a sequel. It could be a prequel, just as A Quiet Place 2 was a prequel which allowed for the return of one major fallen character. It’s possible we’ll learn that Robert Neville actually survived somehow. Or it could be that all of Smith’s scenes will be flashbacks.

Based on the 1954 Richard Matheson novel of the same name, 2007’s I Am Legend finds Will Smith playing one of the last humans left on Earth. A virus has eradicated 99% of the world’s population. Of the 1% who remain, there are those who are uninfected like Neville, and those who turn into powerful albino cannibals who, like vampires, can’t stand the sun. A former US Army virologist, Neville keeps searching for a cure while hunting escaped zoo animals for food, barricading himself into his apartment at night when the so-called “Darkseekers” hunt, and desperately trying to hold on to his sanity.

One of the more fun pieces of trivia from the film has taken on an almost supernatural air for some fans. Most of the film was set in 2012 which — when the film was released in 2007 — was 5 years in the future, so there were things added to the background of Will Smith’s post-apocalyptic world to make it seem just a little bit unfamiliar. In one moment, a shot includes a Batman vs. Superman logo on a theater marquee even though the actual Batman v. Superman: Dawn of Justice wouldn’t be released until 2016. What some fans liken to some kind of psychic powers actually has a much simpler explanation. I Am Legend c0-writer Akiva Goldsman told Collider in 2014 he had previously worked on a Batman vs. Superman project that never saw fruition, so the logo was simply a nod to that unrealized film. 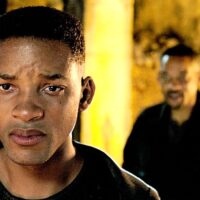 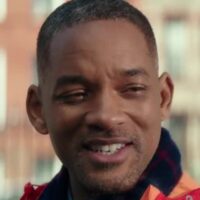