The white Vision has finally made his appearance in the Marvel Cinematic Universe. The newest episode of WandaVision, titled “Previously On“, has given fans the popular iteration of the character in a post-credits sequence and it is one that has some serious implications for the character. There is a lot we can figure out due to this appearance and it could tell us what the future has in store for Vision as a character.

But first, who is the white Vision? In the comics, Vision was disassembled by a task force and then reassembled by Hank Pym but he had lost his humanity and the brainwave patterns that helped make him who he was. As such, he returned as a pale version of himself and was devoid of any emotion. In WandaVision, we find out that a very similar series of events has taken place. It turns out that Wanda did not actually steal Vision’s body from S.W.O.R.D. and that Director Tyler Hayward has been rebuilding Vision for his own purposes.

We get our first glimpse of white Vision when Hayward decides to reveal it as their last weapon against Wanda. Their inability to enter the Hex has been because they have not had anything imbued with Wanda’s power. Once they realized they could siphon her energy from the drone they sent in, they are able to use that to revive the pale corpse of Vision.

Hayward activates the white Vision who seems to be able to operate completely on his own, but will almost assuredly be used as a weapon against both Wanda and her fabricated version of Vision that exists inside the Hex.

With the white Vision now operating under the influence of Hayward and S.W.O.R.D., we have to imagine that this is leading to a showdown with not only Wanda but also the Hex’s Vision. What could end up happening here? Will Wanda be forced to watch her one true love die for the third time? Or could the red Vision end up somehow being able to possess the white Vision so that he will be able to leave the Hex? No matter what, the fact that we will see an antagonistic version of Vision is a great way to set up the finale of WandaVision. Hopefully, there will still be something of the real Vision left inside of his pearl husk. We do see him looking at his own hand. Could he begin to understand his own sentience and possibly remember who he was?

The finale of WandaVision is promising to deliver something truly spectacular, brutal, and potentially heartbreaking. With the white Vision now in play, things could truly fall apart for Wanda and her emotional status could suffer another devastating blow. Having to see Vision die yet again could be the last straw. This might be the break that causes the multiverse to fracture for good and sets up the many alternate universe stories we are expecting to see for future installments in the Marvel Cinematic Universe. 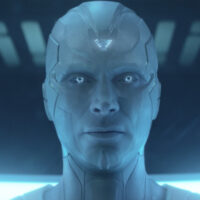