Weird: The Al Yankovic Story is deeply earnest in its comedy and primarily directed to his existing fans, but that's not a bad thing.

Alfred “Weird Al” Yankovic is one of the more unlikely success stories of pop music: a goofy-looking song parodist who plays the least cool of instruments, the accordion. Despite all these things, he has become a beloved musician, actor, author, and general fixture of pop culture, which makes him prime material for an overly dramatic, loose-with-the-facts biopic in the vein of Rocketman and Bohemian Rhapsody. He (and all of us as a culture) finally got that with the Roku Channel film Weird: The Al Yankovic Story, a movie that will undoubtedly delight his fans and cause everyone else to feel a little left out of the joke.

Weird: The Al Yankovic Story stars Daniel Radcliffe as the titular character, resplendent in a shaggy wig, mustache, and Dahmer-like glasses to complete the musician’s best-known look. However, Radcliffe does not actually show up until a good 20 or so minutes into the film; prior to that, Richard Aaron Anderson and David Bloom both play Weird Al Yankovic at various ages, because this is the kind of music biopic that has to cover a famous person’s entire life before they perform.

The mileage a viewer gets out of Weird: The Al Yankovic will depend largely on two things: their appreciation for the highly specific tropes of rock n’ roll biopics and how much they love seeing famous comedians playing people from the 1980s. Any conversation about Weird: The Al Yankovic Story will have to invoke Walk Hard: The Dewey Cox Story, the 2007 cult film that similarly sought to mine comedy from the ultra-serious Oscar bait of Walk the Line and Ray.

However, there is one big difference: where Walk Hard allowed John C. Reilly to go clownishly big as he accidentally cut people in half and hung out with the Beatles in India, Weird: The Al Yankovic Story does it straight. According to director Eric Appel (in his feature film debut), the whole idea was to try to get laughs out of the contrast between the absurdity of the story and the earnestness of the actors doing things like getting a moment of inspiration from a bologna sandwich. In that, the film is a rousing success.

Weird: The Al Yankovic Story was co-written by Yankovic himself and Eric Appel and, given that it is a movie in which the musician is portrayed as the most popular performer of all time, actually hits a lot of his actual life points. Much like in the movie, his father was a factory worker. He actually did get his first accordion from a door-to-door salesman. Madonna herself did come up with the idea that he parody “Like a Virgin” as “Like a Surgeon.”

However, while Weird Al Yankovic was indeed mentored by radio DJ Barry Henson aka Dr. Demento (portrayed by Rainn Wilson), there is no historical indication he ever faced off against a contemptuous Wolfman Jack (Jack Black) and spontaneously came up with “Another One Rides the Bus” in the presence of Queen bassist John Deacon. Similarly, he is not known to have had a gun battle with the notorious cocaine cartel kingpin Pablo Escobar (Arturo Castro), but it does make for a bizarrely fun scene.

Daniel Radcliffe impressively commits to the role, even when it requires him to do a full-on Jim Morrison drunken ecstatic poetry sequence or have a trippy LSD journey that results in him writing “Eat It,” which in the movie is an original song later parodied by Michael Jackson. That Weird: The Al Yankovic Story consistently goes out of its way to reinforce that conceit over and over again is a strong indicator of what kind of humor it is going for. And, if nothing else, this movie reminds everyone that Daniel Radcliffe is really, really ripped these days.

Weird: The Al Yankovic Story began streaming for free on The Roku Channel on November 4, and was produced by Funny or Die, inspired by Eric Appel’s 2010 fake trailer of the same name. For years, fans implored Yankovic to make the real thing, in what has turned out to be one of the sillier and more successful fan campaigns in some years. Without a doubt, this is a movie more directed at people that already like Weird Al than mass audiences, but, really, isn’t his whole career? 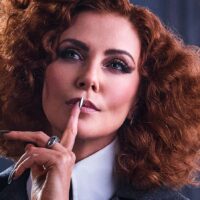