WandaVision has been playing the long game with its villain. Many have assumed that Wanda Maximoff herself was the true antagonist of the series. Others have theorized that characters ranging from Mephisto to Mojo have been pulling the strings behind the scenes. While there could certainly be proof that there is yet another evil character waiting in the wings, the series has revealed the person that has actually been manipulating Wanda and her powers from the start. And it turns out that they were right in front of our faces the entire time.

WandaVision has shown its villain to be none other than loveable neighbor Agnes, whose real name is Agatha Harkness. In the comics, Agatha Harkness is an extremely powerful witch who actually trained Wanda in the use of real magic. Since Wanda’s powers are actually extra-dimensional in nature, Agatha taught her how to utilize real magic as well. In fact, she has often been portrayed as an ally to Wanda in the comics. However, her magical abilities seem to be in service of something darker in the Marvel Cinematic Universe.

There are a lot of potential connections to be made now that WandaVision had unveiled its villain. Agatha Harkness originally showed up in the comics as the governess of Franklin Richards, the son of Reed Richards and Sue Storm. This immediately makes a connection to the Fantastic Four which we know is on the horizon for the Marvel Cinematic Universe. Whether or not she will have any connection to those characters in this iteration remains to be seen. And more strikingly, it looks like Agatha’s appearance could be paving the way for Mephisto, the Marvel universe’s equivalent of Satan. There are a few clues in this most recent episode that seem to point to Mephisto’s eventual entry into the Marvel Cinematic Universe. First off, there is this eerie appearance of an insect that Wanda notices in Agatha’s house:

In the comics, Mephisto’s first appearance was actually that of a fly. Could WandaVision have just introduced this major villain in the same way he was introduced in the comics? There is also the matter of what is in Agatha’s basement. We see a number of spooky magical implements and even a shrine that feels very devil worshipy. There are also strange runic symbols above the different archways in Agatha’s basement. Could these be doorways to other dimensions?

Last but not least, the WandaVision villain looks to have some kind of archaic spellbook or artifact in her basement as well. It seems to be surrounded by a kind of fiery energy. Seems more than a little infernal, doesn’t it? Has Agatha been using this book to cast some kind of reality-warping spell on Wanda and has been using her powers to hopefully break through reality in order to summon Mephisto?

Regardless, Agatha Harkness has been shown to be the WandaVision villain all along. We are hoping the next episode is going to show us things from her perspective and exactly how she got to where she is. She seems to be able to inject images into peoples’ minds as well – she does this to Wanda at the end of the episode – and we would love to see just how much of this bizarre reality is from her magic instead of Wanda. 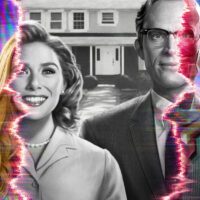 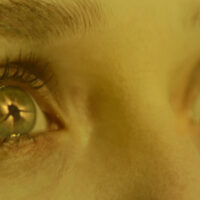