Viggo Mortensen brought the iconic character of Aragorn to life in Peter Jackson’s original Lord of the Rings trilogy, and last played the character in 2003’s The Lord of the Rings: The Return of the King. In the 18 years since the Lord of the Rings, Mortensen has been nominated for multiple Academy Awards and arguably been one of the most successful actors to come out of the franchise. But despite the fact that he hasn’t played Aragorn in almost two decades, a new interview makes it seem like Mortensen is up for returning to the role.

In an interview with Collider, Viggo Mortensen was asked if he would be willing to return as Aragorn in a future project. Mortensen said, “Yeah, why not?” before saying there are endless possibilities when it comes to adapting Tolkien to either the big screen or small screen. While it’s not clear what project Mortensen could possibly work on as Aragorn, it certainly seems like the actor is ready to return to Middle-earth at any time.

Amazon has, however, bought the television rights to The Lord of the Rings, which ensures they have a five-season commitment to the show. This investment of at least $1 billion from Amazon makes it clear that they have big plans for this new series. The Lord of the Rings is currently filming in New Zealand, with the first season expected to premiere sometime in 2021. But even though Viggo Mortensen is ready and willing to play Aragorn again, this new series is set thousands of years before the events of The Hobbit and The Lord of the Rings, so it could be difficult to find a natural way for him to appear in the series.

In the interview, Viggo Mortensen does mention that he doesn’t know much about the new Lord of the Rings series, other than that it’s shooting in New Zealand and that it is directed by J.A. Bayona. Mortensen does show enthusiasm about the project, though, saying “I’m looking forward to seeing it.” With at least five seasons of stories to tell, maybe the series could jump forward a few thousand years and give Mortensen a chance to play Aragorn once more?

Since The Lord of the Rings: The Return of the King, Viggo Mortensen has been nominated for three Academy Awards for Best Actor in 2007’s Eastern Promises, 2016’s Captain Fantastic, and 2018’s Green Book, which also won Best Picture. The actor has also starred in such projects as Hidalgo, A History of Violence and The Road. Last year, Mortensen made his directorial debut with Falling, a film he also wrote, starred, and co-produced.

In the last two decades, Viggo Mortensen has worked with David Cronenberg three times, with A History of Violence, Eastern Promises, and A Dangerous Method, and Mortensen directed Cronenberg as well in Falling. Recently, Mortensen made headlines, saying that he and Cronenberg are working on another project together that he called disturbing that they’re hoping they will shoot this summer.

But if Peter Jackson ever decides to revisit the world of Middle-earth once more, it seems as though Viggo Mortensen would be ready to reprise the role of Aragorn for a new adventure. 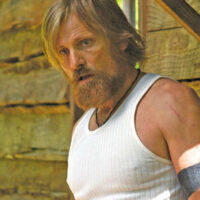