By Charlene Badasie | 24 hours ago

A new photo has emerged from the set of Spider-Man: No Way Home. The film originally wrapped production back in March but is currently in the process of re-shoots which explains the new image. The picture comes by way of Twitter user@3C Film and shows Tom Holland as Spider-Man crossing paths with Benedict Cumberbatch as Doctor Strange.

At first glance, it may not be the best picture, but Spider-Man (Tom Holland) is seen on the left waving to Doctor Strange (Benedict Cumberbatch) outside of what is probably the Sanctum Sanctorum. The image also features a truck in the background with the FEAST logo on the back – a tease that comic book fans will instantly recognize.

Food, Emergency, Aid, Shelter and Training (FEAST) is a homeless shelter owned and operated by Martin Li also known as Mister Negative, an antagonist of the famed web-slinger. Masquerading as a noble cause, FEAST predominantly served as a front for Li’s criminal activity. But once his double-life as a villain was revealed, the project was shut down. Fortunately, Aunt May revived the project with the help of volunteers like Peter Parker, Miles Morales, and Randy Robertson (the son of Daily Bugle editor Joe Robertson). Could Tom Holland be fighting on this front as well?

Including FEAST in the Marvel Cinematic Universe makes total sense, given the state of the world after the events of Avengers: Endgame. And it’s in line with the charity work that Marisa Tomei’s Aunt May was involved with in Spider-Man: Far from Home.

Although plot details are being kept tightly under wraps, we do know that Benedict Cumberbatch’s Doctor Strange will essentially be taking up Tony Stark’s role of mentor to Tom Holland’s Peter Parker. Other set photos (via Just Jared) feature Peter and MJ in the snow, hinting that the story takes place over the holiday season.

The film is also expected to feature an array of villains including Electro (mentioned earlier), Kraven the Hunter, Scorpion, and the Green Goblin. With the appearance of the Green Goblin, the film could see the introduction of Oscorp and Nick Fury’s galactic version of S.H.I.E.L.D., known as S.W.O.R.D

Theories also suggest that the addition of Doctor Strange is the conduit to bringing Andrew Garfield and Toby Maguire’s versions of Spider-Man into Tom Holland’s universe by way of the multiverse. Previous reports state that these characters will appear during the final scene to help defeat all the Spider-Men’s combined foes.

Spider-Man: No Way Home is scheduled to arrive in theaters on December 17, 2021. A fourth Spider-Man film is in development. 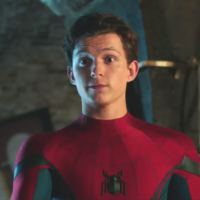