Jimmy Kimmel’s “Mean Tweet” segment has eviscerated many celebrities. As the segment suggests, the popular talk show host has guest celebrities read mean tweets about them. This can range from their appearance, to their personal lives, to their work. The celebrities typically take it in the good fun that it is intended for. Tom Hanks is no exception. Known as one of the nicer celebrities, Tom Hanks read one tweet that was slightly baffling. The Twitter handles are blurred out in order to protect the users’ identities. But even Hanks could not help but be amused after he was mistaken for Tom Cruise on the show.

You can see the moment where Tom Cruise was mistaken for Tom Hanks in the video below, which starts at the 1:03 timestamp.

“Tom Hanks is so sweaty in Top Gun,” Hanks read out loud in the segment. Of note, Tom Hanks was not in that movie, Tom Cruise was. The tweet went on to say, “Get a shower you smelly little dwarf.” Without missing a beat, Hanks responded that he took it personally. Hanks’s good humor is one of the reasons that he remains a cultural icon. Many may have taken offense at not only the extremism of the tweet, but the factually incorrect information.

Top Gun is one of the roles that shot Tom Cruise into superstardom. His previous credits of note included The Outsiders and Risky Business, which both came out in 1983. Not long after Top Gun was released in 1986 and the actor was off to the races. He starred in many blockbuster hits such as A Few Good Men, Days of Thunder, and Eyes Wide Shut. Some of these films were known for uniting him and his wife at the time, Nicole Kidman. Tom Cruise may have immense star power, but he and Tom Hanks are in very different types of films and present themselves differently in public. Cruise consistently makes headlines for varying degrees of controversy. He is one of The Church of Scientology’s most famous celebrities, and is often criticized by ex-Scientologist Leah Remini (via Insider). Remini was once heavily active in the church but since has created the television series Scientology and the Aftermath, shedding light on the practices employed by those in charge.

Tom Hanks is rarely embroiled in any such controversy. The closest he has come is notoriety due to the podcast Dead Eyes (via Rolling Stone). Connor Ratliff’s podcast is a humorous retrospective on being fired by Tom Hanks from Band of Brothers for having “dead eyes.” But even in light of the less than flattering anecdote, Tom Hanks continues in his success.

Fans were worried during the pandemic when both he and his wife Rita Wilson contracted COVID-19 (via The Guardian). These fears were soon quelled and now Hanks is back working harder than ever. His most recent venture is the Apple TV film, Finch. Finch is a dystopian drama following the title character (Hanks) as he tries to survive in the desolate landscape. He is joined by his dog and a robot programmed to protect them.

Tom Hanks can also be seen in a brief role in the Yellowstone prequel, 1883. Hanks portrays a Civil War general that James Dutton encounters during the Battle of Antietam (via Deadline). This is positive press for the actor. Yellowstone is Paramount’s flagship show and continues to bring in high ratings. 1883 stars real-life country music couple Tim McGraw and Faith Hill in the lead roles (via Variety). Fans can catch the premiere on December 19th on Paramount. 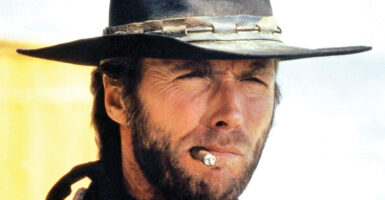 Clint Eastwood’s Best Movie And How It Changed A Genre

Joe Rogan Under Fire As Scientists Make Plea To Spotify