Tom Hanks Has Been Feuding With A TV Legend For Decades

Tom Hanks has long been billed as a good guy of Hollywood and rightly so. The legendary actor has always carried an air of charm, professionalism and sophistication in every media appearance. However, in a report from Best Life, rumors suggest that even the nicest of Hollywood nice guys can have some bad blood to spill, just ask Henry Winkler.

Yes, Henry Winkler, another loveable legend of Hollywood, of course, best known as Arthur Fonzie Fonzarelli is the man on the other end of this lengthy drama. Apparently, both Winkler and Tom Hanks have had beef that goes back decades. The source of this conflict is Turner and Hooch. For those who don’t know, Turner and Hooch is a 1989 buddy cop movie with a difference. The difference is that the leading duo is one detective played by Hanks and the other is a dog named Hooch. Hooch is a witness to a crime that Hanks’ detective is tasked to solve, the man and man’s best friend’s chaotic relationship serves plenty of humor throughout the lovingly entertaining flick.

However, behind the charming comedy lies a fractured relationship. Henry Winkler was originally signed on as the director but was fired just shy of two weeks into the production. The Happy Days star spoke about the dismissal with People Magazine back in the early nineties, hinting at the fact that Tom Hanks had something to do with the ouster; “Let’s just say I got along better with Hooch [a canine] than I did with Turner [Hanks].”

This was a quote that Winkler used again when he appeared on Watch What Happens Live With Andy Cohen back in 2019 when he was asked questions by a fan calling in to the show about this alleged feud with Tom Hanks. Winkler playfully avoided mentioning Hanks and try to dodge the question altogether, pretending not to hear the query. He goes back to his fondness of the dog and claims to forget the name of the movie it was all about.

Apparently, both Tom Hanks and Henry Winkler have turned to a mutual friend in Ron Howard for advice on the feud. Legendary filmmaker Ron Howards’ relationship with Henry Winkler goes all the way back to Happy Days and he has directed Tom Hanks in five films. Howard spoke to The Daily Mail about the issue the pair ran into as a result of Turner and Hooch saying, “It was just one of those unfortunate things where they really had a working style that did not fit. I know it was painful for both of them and I was able to lend an ear, if not offer any solutions.”

Whilst this serves as confirmation a feud did indeed exist between Tom Hanks and Henry Winkler which Ron Howard admits was ‘disappointing,’ the director told The Guardian that this is a matter of the past, as both Hanks and Winkler attend Howard’s birthday festivities. Howard said, “Oh no, they’ve both been invited to my birthday parties. It’s been a lot of years, two men with a lot of water under the bridge.”

Henry Winkler appeared to confirm this when confronted on the Tom Hanks feud by TMZ back in 2020. The actor stated that there was no such thing as a feud and that he and Tom Hanks had shared a “beautiful” moment together at that year’s SAG awards. When pressed on why he joked around with the so-called ‘feud’ on the aforementioned What Happens Live broadcast, Winkler admitted, “That was just fun.”

Are those the words of someone trying to spin the truth and mask a feud, or is it just the simple truth, that both Winkler and Tom Hanks do indeed get along well? History dictates that it is most likely the latter, as both Tom Hanks and Henry Winkler are regarded as two of the nicest guys in Hollywood, and if Ron Howard says it’s a dine thing, then who is anyone else to argue. As for Hanks, his take as Gepetto in the upcoming live-action Pinnochio film on Disney Plus dropped mere days ago. 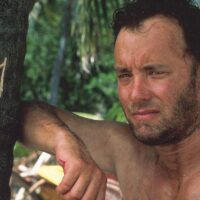