Tom Cruise has no shortage of iconic roles under his belt. He’s played the guy who did impossible missions in the Mission: Impossible franchise. He was the vampire who did not get interviewed in Interview with the Vampire. But there are few roles more iconic in modern cinema than Lieutenant Pete “Maverick” Mitchell. He is the character that inspired a thousand recitations of “I feel the need…the need for speed” among bros, the face that launched a million pairs of aviator glasses. Tom Cruise’s charisma and passion in the film also reportedly cause a 500% spike in applications to become an aviator in the US Navy. With the recent release of Top Gun: Maverick, Maverickmania is at its highest point in years, which is probably why the original 1986 Top Gun is currently in the top ten most-watched movies on Netflix.

To describe the plot of Top Gun feels like foolishness. It is the kind of movie that prioritizes stylish visuals and editing over narrative or complicated characterization, an approach by director Tony Scott that Michael Bay later perfected to become the de facto template of modern action movies. Top Gun more or less kicked off the mini-genre of films in which Tom Cruise is the best at something but also a wild card, loses confidence, but then becomes even better at it and everyone loves him. It would be followed by The Color of Money (best at pool), Cocktail (best at bartending), Days of Thunder (best at car racing). Technically, Far and Away has Tom Cruise being the best at bare-knuckle boxing, but he also had the worst accent, so it is a wash.

But Top Gun is the most stripped-down version of that story: Tom Cruise is a hotshot pilot with a chip on his shoulder. Despite a record of recklessness (not exactly what you want in someone being trained to operate a flying death machine that costs millions of dollars), he makes it into  TOPGUN, the Naval Fighter Weapons School at Naval Air Station Miramar along with his Radar Intercept Officer/co-pilot Goose (Anthony Edwards). There, he comes into conflict with his fellow prodigy Iceman (Val Kilmer, who did not want to be in the movie), falls in love with their civilian instructor Charlie (Kelly McGillis), gets Goose killed (he’s found not at fault by a tribunal, but c’mon), and eventually gets better at flying so Tom Cruise is accepted by everyone.

Top Gun was an immediate sensation upon release, grossing $356 million against a $15 million budget. Part of that is likely due to the cooperation of the US military, which demanded heavy script approval as a condition for usage of their equipment and uniforms. They toned down multiple potentially contentious aspects of the movie (though notably not the idea that Tom Cruise should be allowed to buzz as many flight control towers as he wants) like moving a flight scene from Cuban waters and removing an aircraft carrier crash from the script. It is also noticeable that Top Gun carefully tiptoes around mentioning their combat adversaries as anything but “the enemy,” though a few Soviet Union Red Stars can be briefly seen in an opposing combatant’s cockpit.

It also fully cemented Tom Cruise as one of the preeminent movie stars of his generation. He had been one of a number of up-and-coming actors of equivalent status pre-Top Gun. Just a few years earlier, he had been just one more face in Francis Ford Coppola’s The Outsiders as part of a cadre of stars marked for stardom, including Rob Lowe, Ralph Macchio, Emilio Estevez, Patrick Swayze, and Matt Dillion. He had followed it up with a number of decent hits like Risky Business and All the Right Moves (a football-oriented proto-Tom Cruise is good at stuff movie), but Top Gun was the movie that truly put him on an A-list that he has never really come down from since.

As such, it is not terribly surprising that Tom Cruise would finally return to the role of Maverick for a much-delayed (and delayed and delayed again) sequel, to outstanding box office receipts. It is remarkable how much more favorably critics are treating Top Gun: Maverick, to the point of Tom Cruise receiving an honorary Palme d’Or at the Cannes Film Festival. But none of that would be possible without the original taking breaths away. 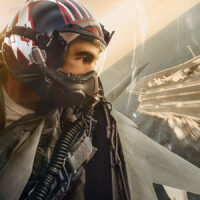 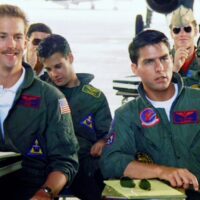