The Rock got into trouble at DC when he went over the other executives' heads to David Zaslav to present his plan.

After The Rock convinced Warner Bros. bosses to resign Henry Cavill as Superman, the future of the newly minted DC Studios looked promising. But the most electrifying man in sports entertainment may have overplayed his hand, as “Dwayne went around everyone, which didn’t sit well,” a source familiar with the situation told Variety. Following the merger with Discovery in April, Dwayne Johnson met with CEO David Zaslav to pitch a multiyear movie plan for Black Adam and Superman.

But his plans for several films, which would have seen their stories intertwine with a Superman versus Black Adam showdown, ultimately served as the franchise’s kryptonite. Along with The Rock, producer Hiram Garcia (the star’s former brother-in-law) and Beau Flynn also were part of a brain trust who met with Zaslav with a new vision for DC.

But The Rock’s DC meeting, which apparently downplayed the future of Black Adam, took place during an executive power shuffle that made a lot of people unhappy. And although Film Chief Toby Emmerich said the studio would find another actor to play Superman back in 2018, Warner Bros. film co-heads Michael De Luca and Pam Abdy approved a cameo for Henry Cavill in Black Adam.

Still, The Rock got his wish and his vision for the DC Extended Universe seemed to be moving in the desired direction. But when the box office takings for Black Adam came in, everything fell apart. Following its October 2021 release, the movie earned $391 million against a $195 budget and $40 million worth of reshoots.

The numbers shattered any hope The Rock may have had for portraying the lightning bolt-wielding antihero for DC again. It also officially ended Henry Cavill’s tenure as Superman. While the Man of Steel star was rumored to have ditched his manager Dany Garcia, who also represents Dwayne Johnson, because of his axing, sources told Variety the move was unrelated to any behind-the-scenes drama.

Garcia, who also happens to be The Rock’s ex-wife, is still a strategic adviser to the former DC actor. Meanwhile, Johnson’s relationship with Warner Bros. Discovery had already been under strain. The former WWE star pushed for a producing credit on the animated feature DC League of Super-Pets but failed to adequately promote it.

The Rock also insisted that the New York premiere of DC’s Black Adam feature a tequila bar with his Teremana brand at the forefront. Although alcohol was a disturbing choice for a PG-13-rated movie, the studio complied with the actor’s wishes. But as his wants increased, more people became tired of the situation. “His demands increased and the returns just weren’t there,” another insider told the publication.

However, box office analyst Paul Dergarabedian says The Rock simply found himself in a catch-22 situation with DC’s Black Adam. “You can’t have a more modest budget when this level of talent is involved,” he told Variety. He also explained that budgets are commensurate with the talent involved. With a star like Johnson leading a film, needing more money is a no-brainer.

Dergarabedian also notes that Black Adam still managed to find a place in the box office top 10 for 2022. But when James Gunn and Peter Safran were appointed to lead the superhero franchise, The Rock’s time with DC was officially over. The pair are now planning a complete blanket overhaul of the entire slate of comic book movies. 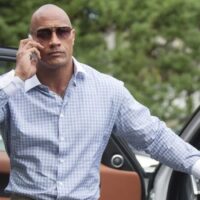