Production on Rob Zombie’s dream project, The Munsters reboot movie, has recently finished, and we have a new look at Sheri Moon Zombie, who is playing Munster matriarch Lilly Munster in the film. Rob Zombie, who is writing and directing the film, has been active on social media, particularly Instagram, sharing tidbits and pictures from the set. In his latest post, Zombie shows Sheri in full costume, posed in front of the Munster home while she appears to be buying lemonade from local kids set up on the sidewalk. “Lily always supports the local businesses of Mockingbird Lane,” Zombie wrote in the post accompanying the picture. “The adults may be scared, but the kids understand. Monsters… I mean Munsters are cool.” He also teased that big news about the film was coming this week, according to MovieWeb.

Production of The Munsters reboot began earlier this year in Budapest, Hungary, where Zombie has built a faithful replica of the Munsters house. Many of the cast finished filming within the past two weeks, indicating that production has completed. A release date has not yet been announced, but many expect it may be this year, with a likely Halloween date. We may find out for sure soon. Earlier today Zombie took to Instagram to let followers know that the first teaser trailer for The Munsters will be dropping tomorrow — Wednesday, June 7.

Sheri has been Rob’s muse for years, ever since she appeared in one of his music videos in the 1990s. The pair married in 2002, and she has appeared in most of his films, making a big impression in his horror flicks, although she is not a fan of the genre herself. Joining her in The Munsters reboot cast is Jeff Daniel Phillips (Westworld, The Gifted) as Herman and Daniel Roebuck (Lost) as Grandpa Munster, who was highly complimentary of Sheri’s work as Lily. “I think she’s terrific and I absolutely love working with her,” he said. The roles of Eddie and Marilyn Munster have not been revealed, and it is not clear if they are even in the film.

Rob Zombie is stepping out of his horror comfort zone for this film, aiming for a PG rating for The Munsters reboot, to keep it as family-friendly as the original series. Zombie has been a fan of the original series since he was a child, and he feels a faithful reboot of the series, including one that is suitable for kids, was the only way to go. “There’s not a better person in Hollywood, or anywhere else on the planet, who should be making The Munsters movie other than Rob Zombie,” Roebuck said in an interview. The film will be a far cry from his past R-rated work, which includes the 2007 Halloween reboot, House of 1,000 Corpses, The Devil’s Rejects, and 2019’s 3 From Hell, all of which starred Sheri Moon Zombie.

Fans were also excited to hear that, in a nice nod to the original series, Pat Priest will appear in the film. Priest played Marilyn on the show (one of two actresses to actually play the role during the original series run), although her exact role in The Munsters reboot has not yet been revealed. Word of her appearance had reportedly leaked a couple of months ago, but Zombie himself only recently confirmed the casting. As of now, the only other surviving Munsters cast member, Butch Patrick (who played Eddie), has not been confirmed as appearing in the film.

Among the other cast members in The Munsters reboot are Jorge Garcia (Lost), who is playing Floop, Dr. Wolfgang’s hunchback assistant and Herman’s best friend. Richard Blake will appear as Dr. Wolfgang, and Sylvester McCoy will play Igor. It was also recently revealed that Elvia herself, Cassandra Petersen, would appear in the film as Barbara Moon, a real estate agent living in the Munsters’ neighborhood of Mockingbird Heights. 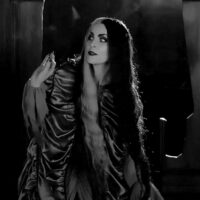 See The Munsters Trailer Do The Series Right