A show that was made famous on MTV is returning with a brand-new format, bringing back one of the most popular reality shows in television history.

Ozzy Osbourne, his wife Sharon, and his two children, Kelly and Jack, are no strangers when it comes to being in the spotlight. Ozzy, born John Michael “Ozzy” Osbourne, rose to fame in the 1970s as the lead vocalist for the heavy metal group Black Sabbath. He was fired from the band in 1979 due to his drug and alcohol additions, however, he went on to have a successful solo career once he got his act together. In the early 2000s, Ozzy became a reality star, appearing as himself on MTV’s wildly successful reality series The Osbournes. The show premiered on March 5th, 2002 and ran for four seasons before wrapping up in 2005.

Ozzy has made headlines recently after announcing he was fed up with living in the United States. The English-born celebrity announced his reasoning for wanting to leave the country in an interview with The Guardian. He said, “Everything’s f***ing ridiculous there. I’m fed up with people getting killed every day.” He continued, “God knows how many people have been shot in school shootings.” Now that he and his wife Sharon are back in the United Kingdom, Deadline is reporting that BBC (British Broadcast Channel) is bringing back MTV’s reality series The Osbournes in the new titled show Home to Roost.

Like The Osbournes, Home to Roost will follow the family as they celebrate Sharon’s 70th birthday as well as the birth of Kelly’s soon-to-be-born baby. Jack is said to be appearing in the series, however, it’s unknown at this time whether Ozzy and Sharon’s daughter Aimee will pop up on the new show.  Aimee wasn’t a regular on The Osbournes, but she did make appearances from time to time.

Following the series finale of The Osbournes, Ozzy co-starred with Kelly and Jack in the reality show Ozzy & Jack’s World Detour. The first season premiered on July 24th, 2016 on A&E and consisted of 10 episodes. The series ran for three seasons, with the final episode airing on June 13th, 2018. Each episode followed the family as they visited different places to learn about the history of the sites from experts.

Although Ozzy has had a successful career on television, his wife Sharon’s resume is far more impressive. After The Osbournes wrapped on MTV, Sharon spent several years as a judge on The X-Factor and America’s Got Talent. From 2003-2006, she hosted her own talk show The Sharon Osbourne Show. In 2010, she landed a position as co-host on CBS’ The Talk but was terminated in 2021 following a heated on-air conversation about race as well as accusations of racist comments that led to an internal investigation by the network.

Now that the Osbournes are back in their home country, it’ll be interesting to see how Home to Roost differs from the family’s first reality series. Part of the appeal of The Osbournes was watching the family navigate life in the United States. We know the new show will follow the family as they make their return to Britain and move to the rural town of Buckinghamshire, which is located approximately 45 miles west of London. Home to Roost will premiere sometime in 2023. 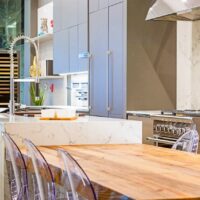 A Beloved Cooking Show Is Getting Called Out