Jessica Henwick had her own red pill/blue pill moment in Hollywood recently. The British actress, known for playing Nymeria Sand in Game of Thrones and Colleen Wing in Iron Fist, found herself torn between a role in Marvel’s Shang-Chi and the Legend of the Ten Rings and the fourth Matrix movie. It all began when she was on a hiking vacation in Spain. In an interview with Entertainment Weekly, Henwick recalled the exact moment she was offered a role in The Matrix 4. The actress got an email asking for a self-tape audition, but she turned it down at first. “I was on an extended trip and it wasn’t the place to go make a self-tape,” she told the publication. Once she was finally home, she received another message.

Matrix 4 director, Lana Wachowski hadn’t found an actress to play Bugs – a blue-haired mystery woman with a white rabbit tattoo who crosses paths with Neo (Keanu Reeves) in the new sequel. The self-tape worked out that time, but now Henwick had a choice to make. The day she was to fly to Los Angeles to read with the actors up for the role of Morpheus, was the same day she got an offer to screen test for Marvel’s Shang-Chi.

Although it wasn’t an ugly situation since both studios knew about the other offers, Henwick was given a stipulation – she could only audition for The Matrix 4 or Shang-Chi, not both. And there was no guarantee that she would get either. “It was a red pill, blue pill moment for me,” the Iron Fist star told the publication. She ultimately picked The Matrix: Resurrections because it felt like a rare moment. “I knew that joining The Matrix is not an opportunity that you get every day,” she explained, adding that Marvel is unlikely to stop making movies any time soon.

While she had a great working relationship with Marvel, Henwick knew that joining The Matrix 4 is not an opportunity you get every day. So she knew it was now or never. In the end, her choice worked out perfectly. The Game of Thrones star is now set to appear alongside Keanu Reeves, Carrie-Anne Moss, Jada Pinkett Smith, and Daniel Bernhardt. The film will also feature newcomers like Abdul-Mateen II, Jonathan Groff, Neil Patrick Harris, Priyanka Chopra, Christina Ricci, Eréndira Ibarra, and more.

Announced in August 2019, The Matrix 4 is co-written, directed, and produced by Lana Wachowski, who worked on the three previous films with her sister Lilly. For the new film, Lana shares scriptwriting duties with Aleksandar Hemon and David Mitchell. The project also has Warner Bros. partnering with Village Roadshow once more.

The Matrix 4 will see stars Keanu Reeves and Carrie-Anne Moss reprising their roles as Neo and Trinity respectively. Set 20 years after the events of The Matrix Revolutions, Neo is living a seemingly ordinary life as Thomas A. Anderson in San Francisco where his therapist prescribes him blue pills. Neither he nor Trinity recognizes each other. However, Morpheus offers him the red pill and reopens his mind to the world of the Matrix, which has become more secure and dangerous in the years since the Smith infection.

The Matrix: Resurrections is currently scheduled for release worldwide on December 22, 2021 both in theaters and on HBO Max. 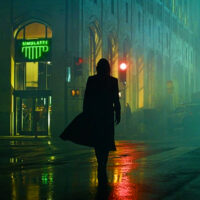