Pre-orders are now available on Entertainment Earth for the toy dubbed “Star Wars The Yamdalorian and the Tot.” The toy is set to come out in February of this year, so getting a pre-order in now will make sure you nab this fun Star Wars-themed toy. The toy comes with 13 accessories that you can mix and match along with the main potato body for the toy. You get an iconic Mandalorian helmet and armor, and a cape. Of course, you also get the classic components of Potato Head toys, the eyes, ears, mustache, nose, arms, and feet. It also comes with a pouch the Yamdalorian can don to fit the Tot inside. You can see the photos of the toys below.

The Mandalorian-inspired Potato Head toy is designed for kids ages two and up, but Star Wars collectors of any age are sure to want to add this to the shelf. It would make the perfect gift for any fan. Most people are probably familiar with Mr. Potato Head from the Pixar film Toy Story, but he’s actually been around much longer. It was first distributed as a toy by Hasbro in the 50s after it was designed by George Lerner. The toy was always fairly popular, but the Toy Story fame definitely boosted awareness and sales.

This Mandalorian Potato Head is also far from the only franchise collaboration Hasbro has done with the toy. In fact, it’s not even the first Star Wars collaboration they’ve done. Before this, they made Darth Tater, a Spud Trooper, R2-POTATOO, Luke Frywalker, Yam Solo, Princess Tater, Darth Mash, and the aforementioned Spuda Fett. They’ve even made Potato Head versions of Looney Tunes, Transformers, Spider-Man, and much more. Outside of the Toy Story franchise of movies, you can even see him in TV shows, commercials, and various other forms of media. In short, there’s a whole Potato Head universe out there if you’re interested enough in it.

As with any Star Wars-related toy, there’s no guarantee that stock of these will last forever. The Mandalorian is a hugely popular show and people love any merchandise they can get from it, especially if the adorable baby Grogu is involved.

If you want to see more of Mr. Potato Head, the characters from The Mandalorian, and The Book of Boba Fett, streaming will make it easy on you. Since all of these properties are owned by Disney, you can watch all of these characters on Disney+. You can see Mr. Potato Head in all of his Toy Story appearances, watch both seasons of The Mandalorian, and catch up on The Book of Boba Fett while watching new episodes every Wednesday all on the same platform. 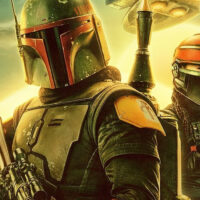