Marketing is ramping up for next year’s The Batman and two new movie posters for the film were released earlier today. Stylized in red and black, they’re nothing like any superhero movie poster you’ve seen before.

The posters feature Robert Pattinson’s Batman and Paul Dano’s Riddler respectively, and neither of the actors’ faces can clearly be seen. Of the two The Batman posters, the one featuring the eponymous vigilante is the most striking. Batman walks through the rain, his form almost completely lost in darkness, and his body seeming more incorporeal as you look down toward the bottom of his cape. You can just barely make out the bottom half of his face and his eyes are completely lost. The entire image is bathed in a red hue, which makes for the only light spot on Batman’s body — the symbol on his chest. Seeing the iconic symbol in red — whether intentional or not (probably not) — is somewhat reminiscent of Terry McGinnis, the future Batman of the animated series Batman Beyond.

Then there’s Paul Dano’s Riddler, which is the oddball of the Batman posters. Between the character’s mask and the intentional obscuring of the face, there’s no way to even tell if it actually is Dano in Riddler’s costume. The color scheme is reversed, with Riddler bathed in red and the background all black. Unlike the Batman, who is centered in his image, Dano is off to the bottom right, as if whoever edited the photo was drunk. It comes off like a poster you would expect for something like David Fincher’s Se7en or something out of the Hannibal Lecter series, which goes along with Matt Reeves’ more gritty vision for his take on the Dark Knight.

Stylistically, the posters go well with the teaser that was released yesterday. The Bat-Signal is revealed after a crack of thunder and a flash of lightning. Just like in the first of the new The Batman posters, we see rain falling in a dark red glow. Robert Pattinson’s voice whispers, “It’s not just a signal. It’s a warning.” At the end we learn that a new full trailer for The Batman is on its way this Saturday, October 16 as part of this year’s DC FanDome. You can watch the teaser below.

Both the new Batman posters and the teaser are being released in anticipation of Saturday’s DC FanDome. The event will be live, virtual, and free to fans this coming Saturday, October 16. Fans can expect news about upcoming and current comics, TV shows, games, and films. Along with the new trailer for The Batman, we’re expecting to learn more about next year’s The Flash, the upcoming HBO Max series Peacemaker, and the upcoming game Suicide Squad: Kill the Justice League.

As the new Batman posters remind us, The Batman is set for a release date of March 4, 2022. The film is directed by Matt Reeves. It stars Robert Pattinson as Bruce Wayne/Batman, Paul Dano as Edward Nashton/The Riddler, Jeffrey Wright as James Gordon, Andy Serkis as Alfred Pennyworth, Colin Farrell as Oswald Cobblepot/The Penguin, Zoë Kravitz as Selina Kyle/Catwoman, and John Turturro as Carmine Falcone. 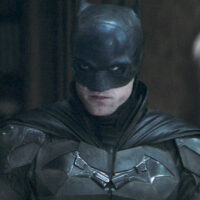