Tetris Movie’s Story Revealed, And It Is Nothing Like You Expect

What did you imagine when you heard there was going to be a Tetris movie? Massive interstellar ships disappearing if they slammed into each other in just the right way? Multicolored skyscrapers dropping out of space and filling up the sky? Or, possibly, just a drama about some guy who isn’t getting his work done because he keeps playing an addictive, yet utterly narrative-free game that it would seem insane to make a movie about? Well, we know what the Tetris movie will be about now, and as fun as those other possibilities might be in the right chemical circumstances, none of them come close.

Collider spoke to the Tetris movie producer Matthew Vaughn about the film and it is not — as the insane guesses above might suggest — an adaptation of Tetris. Instead it is, amazingly, a Cold War era thriller about how Tetris found its way to the western world. It was a Russian who invented the game during the era of the Soviet Union, and an American who went behind the Iron Curtain and who, in Vaughn’s words, “stole the bloody thing and brought it back to America.” It was Dutch game designer Henk Rogers who ultimately got the rights to bring Tetris to consoles. Rogers will be played by Taron Egerton, who Vaughn has worked with extensively on the Kingsman film series.

The Tetris website says it was the Russian born Alexey Pajitnov who created the game in 1984 while he was working at the Soviet Academy of Sciences. Tetris quickly became a hit at the academy with all of Pajitnov’s colleagues playing it whenever they could. Like a bootleg tape building up word of mouth about a band, Pajitnov’s colleagues started passing the game around on floppy disks. According to Live Science, Pajitnov sent a copy to a colleague in Hungary, and either that same colleague or someone he had passed the game on to displayed it at it a Hungarian Institute of Technology software exhibit where it caught attention of Robert Stein, owner of Andromeda Software Ltd. According to the Tetris movie’s IMDb page, it will be Toby Jones — Arnim Zola in the first two Captain America movies — playing Stein.

Pajitnov did not have the option to license or sell the game himself because intellectual property did not exist in the Soviet Union. Stein licensed the game from Elektronorgtechnica (Elorg), the Soviet agency created to deal with foreign distribution of software created in the Soviet Union. Meanwhile people like Stein and Rogers started sealing licensing deals in America and Japan, without the knowledge of Elorg. While in real life what happened with the game seems more of a series of dense business and legal maneuvers, it seems likely an espionage spin will be thrown into the mix for the Tetris movie, as Vaughn describes it as “The Big Short meets Bridge of Spies.”

Along with Egerton and Jones, the cast includes Russian actor Nikita Efremov on board as Alexey Pajitnov, Togo Igawa (The Last Samurai) will play former Nintendo president Hiroshi Yamauchi, Roger Allam (V for Vendetta) will play Mirrorsoft owner Robert Maxwell, and Matthew Marsh (The Iron Lady) will play Mikhail Gorbachev, former President of the Soviet Union. The Tetris movie will be directed by Jon S. Baird (Filth) from a script by Noah Pink (Genius). There is no firm release date, but the film is expected to stream on Apple TV+ in the third quarter of 2022. 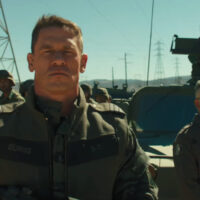 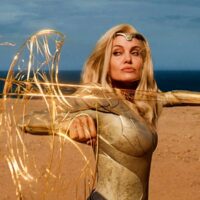