Tenet has finally hit the United States box office. After many delays, the new blockbuster action film from Christopher Nolan has opened in theaters across the nation. Well, sort of. There is a lot to examine about this opening weekend because it is one of the most unique in the history of theatrical film distribution.

In regards to pure numbers, Tenet brought in $20.2m over the three-day weekend across 2,810 theaters, and that includes reporting from Canadian exhibition as well. It will be interesting to see how much it adds with the additional Labor Day audience (if there is one). Along with its international take of $126m, Christopher Nolan’s twisty spy thriller has raked in around $146m total.

It is worth noting just how strange Tenet‘s domestic release is. Normally, wide-release films open in big markets like Los Angeles and New York, but many of those theaters are remaining closed due to the COVID-19 pandemic. To give a better understanding of this, a normal release for a tentpole studio film will see itself playing on anywhere from 3,500 to 4,000 screens across the United States. Tenet has opened on less than 3,000 screens right now. Not to mention that eight of the top ten theaters from Nolan’s last movie, Dunkirk, are currently closed. This all goes to show you that his newest film is getting released in a very unforgiving marketplace.

As of this writing, only 65% of the domestic marketplace has reopened for business. Add to that the COVID-19 protocols that are limiting the number of patrons that can be in a single screening. Auditorium capacities are operating at anywhere from 25% to 40%. And in order for Tenet to play in drive-in theaters, Warner Bros. is demanding that a nearby regular theater must also be screening the film. If it hasn’t been made clear yet, there are a ton of factors that are going to affect this initial release for Tenet.

Part of the response could also be tied to Tenet‘s critical response. Rotten Tomatoes has a 74% critic rating and a 79% audience score for Nolan’s new event film. That isn’t bad but it is significantly lower than the majority of his major releases. You can read our review of the film here, but it is fair to say that this movie isn’t lighting a fire under the mainstream quite yet. Business could pick up this coming weekend, but it might not be enough of a driving force to get people to come back to the movies. If Tenet gets to monopolize more screens, it could see an uptick in returns this weekend.

Or, it could be that the majority of audiences aren’t quite comfortable with returning to theaters. The COVID-19 pandemic is still very much a motivating factor for the decisions consumers are making, and they might not feel ready to come back to theaters for something like Tenet. Christopher Nolan has a reputation for creating awe-inspiring theatrical experiences, but Tenet isn’t creating the same fire that other original films like Inception or Dunkirk did. Whether that has to do exclusively with the public’s fear of contracting COVID-19 or the lack of strong word-of-mouth for the film, it is unclear at this time.

This first weekend for Tenet was always going to be the equivalent of dipping your toe in the water. With no competition set to release for the rest of September, Tenet is going to be a month-long experiment regarding America’s willingness to return to the movies. If folks simply aren’t feeling safe and Tenet doesn’t feel like appointment viewing, it is likely that Nolan’s film will begin to slide off over the next few weeks. It won’t have any competition until October when Wonder Woman 1984 is set to release, and that is another Warner Bros. production so it’s not really competition.

Tenet has been positioned – both by audiences and through studio/filmmaker marketing – as the movie that will save theaters in the United States. After this first weekend, that sentiment is looking a little shaky. It is a weird time to be talking about theatrical exhibition and distribution, and Tenet‘s first weekend reflects that weirdness. We will see how it continues to do as the month progresses.

[Author’s note: Medical experts do not recommend going to the movie theaters at this time due to a heightened chance of exposure to COVID-19. This author agrees with their findings. If you must see Tenet, please do so at a drive-in theater if that option is available.] 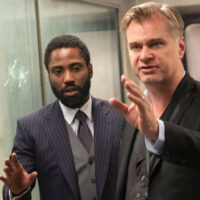