It looks like Supergirl has more work to do. Melissa Benoist, the star of the now-finished CW series is currently closing up a deal on a new HBO Max series called The Girls on the Bus. Greg Berlanti, her executive producer on Supergirl, is also along for the ride.

The Girls on the Bus is a dramedy that will follow four female journalists who follow the campaigns of presidential candidates. In addition to growing closer to each other, they also discover scandals that could change our democracy as we know it. The show is based on a book by political reporter Amy Chozick, who followed Hillary Clinton during her presidential run in 2016. Melissa Benoist, in a different role than that of Supergirl, will likely be playing one of the journalists. As for now, casting details don’t go any further than that. The deal isn’t officially closed either, but rumors make it seem like it will likely go through. In addition to Greg Berlanti producing, Julie Plec and Amy Chozick herself are on as exec producers.

Melissa Benoist has stayed incredibly busy on the DC TV universe over the past six seasons. In addition to starring in Supergirl, she made frequent crossover cameos in other CW shows like Arrow, DC’s Legends of Tomorrow, The Flash, and Batwoman. With all this superhero-ing, she didn’t have a ton of time to take on any other roles in the meantime, with the TV mini-series Waco being a notable exception. Though fans loved her in the role of Kara Danvers, she’s probably going to be excited to take on some more varied roles in the future.

Though the series was originally going to be a Netflix original, the streaming platform dropped the rights. The CW actually picked them up next, and then the decision was ultimately made to make it an HBO Max series. This makes a little more sense since the CW typically leans younger with their material and their audience. An HBO Max series doesn’t have to worry as much about toning down any of the content. Reasons are unclear as to why Netflix opted out, but it’s could be the political undertones that scared them off. Since HBO Max is owned by WarnerMedia, which also owns DC, the choice to go with trusted DC exec producers and a notable actress from their shows seems like a natural one. This will be Melissa Benoist’s first role she takes on since Supergirl if the deal does end up going through.

Melissa Benoist wrapped up her run as Supergirl in 2021, bringing the series to a proper close. Fans were ultimately happy with the finale but were a little disappointed in some of the choices the writers made with the relationships in the show. While we won’t be seeing her in her own series anymore, there’s always a chance she could come back and cameo as the character in any of the ongoing DC shows on the CW. The Girls on the Bus doesn’t have a set release date yet and overall details are still pretty scant. 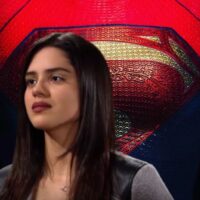