Steve Martin has many a comedy in his day with his later career arc playing very family-friendly. One of those movies took the family piece to the nth (or 12th) degree and made for a pretty fun romp through the hijinks of raising an enormous brood. The concept has been around for a while now and it looks like Disney is going to reboot Cheaper by the Dozen as a new series. It will be coming to Disney+ next year.

It doesn’t look like Steve Martin is going to be involved with the Cheaper by the Dozen reboot and his character will be replaced by Zach Braff who will be co-starring alongside Gabrielle Union. The series is set to follow much of the same story as the Martin movie, a remake of the 1950 movie by the same name, which is about a family who has, you guessed it, 12 children. It looks like the series will take some of the same concepts as the movie versions, though expand them into more of a series take. There is sure to be plenty of comedy to mine here considering the sheer number of children in the house. The announcement came during Disney+ day last week which included a number of huge projects in the works.

In the 2003 version of Cheaper by the Dozen, Steve Martin played Tom Baker, a football coach, who moves his family back to his hometown when he accepts the head job at his former high school. The movie centers around the literal and figurative growing pains around raising this many kids. Bonnie Hunt played his wife and a number of notables were part of his family in the kids’ roles. Those included Piper Perabo, Tom Welling, and Hilary Duff. It was directed by Shawn Levy who would go on to do Night at the Museum, Real Steel, and was at the helm of last summer’s Ryan Reynolds blockbuster Free Guy.

A couple of years later, Steve Martin and company would go on to do Cheaper by the Dozen 2 which rehashed a number of the same themes and brought back most of the same cast. This time they are joined by a rival family with Eugene Levy and Carmen Electra as the parents. It was a critical bomb at 6% on Rotten Tomatoes, though did profit at the box office with $135 million on its $60 million budget. In total, the two movies pulled in almost $300 million.

With this new series, the Cheaper by the Dozen will explore a multiracial relationship with the two leads and likely focus much more heavily on the stories with the children. In the movies, much of the comedy was left in the hands of Steve Martin, but that is likely to be much more spread around for this new show. Though Zach Braff will have to take on that Martin-like role, a larger series will necessitate bringing around more rounded stories. The show is being helmed by Gail Lerner who’s most recently worked on Black-ish.

As for Steve Martin, he recently starred in Hulu’s Only Murders in the Building with Martin Short and Selena Gomez. The murder-comedy series earned rave reviews from critics and it is currently sitting at a cool 100% on Rotten Tomatoes. 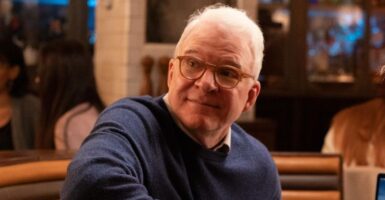