Stargate fans are nothing if not dedicated. Although the franchise has never achieved the peak cultural saturation of its fellow Star-prefixes (Trek and Wars, respectively), few could expect that a modestly performing 1994 science fiction movie starring James Spader, Kurt Russell, and French Stewart would launch an empire. The longest-running series in the franchise, Stargate SG-1, came to a close in 2007 after a move from Showtime to ​​Syfy (then known as the Sci Fi Channel), but various other spin-off series and direct to DVD movies have kept the flame alive. Now, fans can actually watch members of Stargate SG-1 perform a brand new episode. Not only that but an episode created by pure technology. Let’s explain.

Cast members of Stargate SG-1 are taking part in a project called Stargate A.I. Version 2.0, in which the actors essentially do a streamed table read of an episode script written by artificial intelligence. It seems very fitting for one of the more esteemed science-fiction television series to actually begin to be carried on by the very science-fiction concept of AI. This is actually the second event of its kind; in November of 2021, an AI script reading by cast members was so successful that the popular Stargate site The Companion decided to do it again. Even better, this time around, they got series lead Richard Dean Anderson to reprise his character of Colonel Jack O’Neill. Here’s a glimpse at what it will look like:

You can watch the new Stargate SG-1 episode here on The Companion. It is streaming on May 21st at 11am PDT, 2pm EDT, 7pm BST; that is tomorrow, so if you are a real Gatehead, you need to be online right then. Along with Richard Dean Anderson returning to his most famous role outside of McGuyver, the episode will star SG-1 castmates Michael Shanks and Amanda Tapping. This will be the first time in 12 years that the three have reunited for a performance. This episode of ​​Stargate A.I. Version 2.0 will also be hosted by actor Mark Evan Jackson (of The Good Place and Brooklyn 99), who is reportedly a huge fan of the series.

Stargate A.I. Version 2.0 came about as the brainchild of a fan named ​​Laurence Moroney, who also happened to be AI Lead at Google. Stargate SG-1 co-creator Brad Wright had asked via Twitter “Could a world-class AI write a #Stargate script interesting enough for the show’s stars to perform at a reunion?” which sufficiently piqued Moroney’s interest enough to give it a try. Reportedly, a script was able to be produced relatively quickly but was not up to the exacting standards of Stargate SG-1 fans. The next time around, every single Stargate SG-1 script ever produced was fed to AI along with a number of other predictive tools. It is a pretty mammoth undertaking just to get a new episode, but you will have to tune in tomorrow to see if was all worth Richard Dean Anderson’s time. 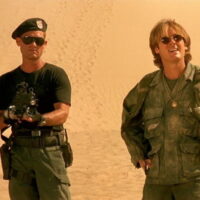 Star Trek Forgets One Of Its Most Important Characters