A rare and iconic piece of Star Wars cinematic history has just sold at auction for millions. An X-Wing fighter model used in the original 1977 Star Wars Episode IV: A New Hope, sold for over $2.3 million on Tuesday, June 21 as part of The Prop Store’s Entertainment Memorabilia Auction in Los Angeles. The model has the distinction of being the only surviving, intact, “pyro” model of the X-Wing used in the George Lucas classic. “Pyro” models were made to be blown up during filming, but this particular model survived and is now in the hands of an anonymous (yet likely happy) collector. The Prop Store posted this in-depth look at the model on YouTube, including the history of the piece and how they screen-matched the model to the film.

The X-Wing’s auction listing details the amazing history behind the model. It is featured in the film as the X-Wing flown by Red Leader Garven Dreis, played by Drewe Henley, who passed away in 2016. The model was screen-matched using stills from the 4K ultra-high definition transfer of Star Wars, as well as behind-the-scenes photos from the Industrial Light and Magic (ILM) model shop in the Lucasfilm archives. The casting marks and airbrush applications match perfectly.

The X-Wing Fighter model was expected to go for $500,000 to $1 million, but a bidding war ensued and drove it into record territory, with the final price of $2,375,000 when the auctioneer’s gavel fell. Crafted from heavy-duty foam, molds, and some original parts, the model almost didn’t survive filming. As a “pyro” model, it was constructed to take small charges to create the illusion of being hit and blowing up. In the film, Red Leader’s X-Wing is hit in its engine by Darth Vader (David Prowse), and a small explosion in the engine is seen in Star War’s climactic Death Star battle. However, the charge used in the engine caused little damage to the model, and when Red Leader’s X-Wing is destroyed in the film, it is only shown as an explosion on the Death Star surface, sparing the model for future generations to enjoy.

According to The Prop Store, the only other surviving X-Wing models from the first film are “hero” models, ships built from scratch using various parts and used for close-up shots. All of those models are still owned by George Lucas and Lucasfilm, making this model the only such X-Wing in private hands. The X-Wings were created from an idea by Lucas and realized by Star Wars concept artist Colin Cantwell, who gave it its unique “X-wing” design and also designed other spaceships used in the film. He died last month at the age of 90.

Interestingly, this particular model was later repurposed to be Biggs’ X-Wing fighter, but there’s no evidence it was ever used in the Star Wars film in that capacity. A lower-quality model of Biggs’ X-Wing was blown up for the shot used in the film. The model comes mounted on a custom-made stand and includes an ILM archive photo showing the exact model with other ships used in the film. It isn’t the only piece of Star Wars memorabilia to sell for a shocking amount recently. An original, unopened VHS copy of Star Wars from 1984 sold for tens of thousands of dollars at auction recently. 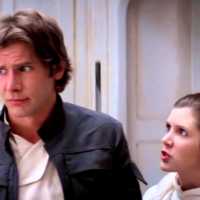