Star Wars: Rogue One Was Almost Terrible, How It Was Saved From Being Awful

The Star Wars spinoff Rogue One was a much different film originally, according to editor John Gilroy.

Rogue One: A Star Wars Story is largely considered the best of the Disney-era Star Wars films, but as many fans know, it overcame a troubled production and massive reshoots to become the film we know today. In a new interview, John Gilroy has provided more insight into the effort to save Rogue One from disaster, and as many suspected, it was worse than we thought, according to The Direct. The film, which featured Felicity Jones as Rebel spy Jyn Erso on a mission to retrieve the Death Star plans, originally was a cinematic “mess” that brothers John and Tony Gilroy were miraculously able to save.

John Gilroy and his brother Tony essentially made a “new story,” much of it shot at the very last minute, leading up to its December 2016 premiere. According to John, Tony was brought in initially just to fix some issues with the film, but ended up convincing Disney to create a new film with a very different story. “Tony huddled with another editor, Colin Goudie…and just basically made a new story. It was quite a different story. And then convinced Disney to invest in that story, which was a sizeable investment in time and money,” John said, admitting even now he’s not sure how much he should reveal of the changes they made.

Gareth Edwards, though still credited as the director of the film, actually made a much different movie than the one we saw. John says they largely disregarded Edwards’ film, only using some scenes that fit with the new story Tony wrote. John would then edit them in, and make notes of new lines had to be recorded, and new scenes that needed to be shot just to make it work.

Tony is now the creative force behind Andor, the Star Wars series currently playing on Disney+ and starring Diego Luna. Though reviews of the initial episodes were mixed, as more episodes have been released and the story progressed, reactions have been much more favorable, with many calling it the best of the Star Wars Disney+ series to air so far. Giving the Gilroys free reign creatively with the series was likely a “thank you” from Disney for saving their bacon with Rogue One.

“I didn’t pay much attention to the other film,” John said. “We’re taking a scene and we’re totally retasking things in that scene.” In a 2018 interview, Tony Gilroy also addressed the major changes they made, calling the Edwards film a confusing “mess” and then saying the film’s problems were “very simple to solve.”

“If you look at…all the difficulty with Rogue, all the confusion of it…and all the mess…it’s actually very, very simple to solve,” he said. “Because you sort of go, ‘This is a movie where, folks, just look. Everyone is going to die.’ So it’s a movie about sacrifice.”

John didn’t get into specifics about the particular plot points and scenes that were changed, but those changes were significant enough that Tony was given a screenwriting credit. Tony had previously revealed that different crawls and titles were considered for the film. He also said the original cut only had K-2SO as the only member of the team to die.

That is a surprising reveal, as deciding to kill off all the main characters is a major change, although it made the most sense in the final cut, and made the story much more powerful. As the original teaser trailer shows, many scenes were cut or completely reshot, including having Forest Whitaker’s Saw Gerrera have a much different hairstyle. A major beach battle was shot and discarded, which included Darth Vader going on a rampage on the Scarif beach rather than on a starship, as the reshoot added.

Cassian Andor and Jyn Erso also reportedly had a romance in the original film, which seems ludicrous considering the circumstances of the story likely wouldn’t have made one feasible. The movie’s original score composer, Alexandre Desplat, was fired and replaced with Michael Giacchino just three months before the film opened, who wrote entirely new music for the film. Giacchino recently jumped in the director’s chair for the Marvel Halloween special Werewolf by Night.

While Star Wars fans are happy Rogue One turned out to be a great film, it couldn’t solve all of its own problems, although that fantastic final scene featuring Vader makes up for a lot. It still suffers pacing issues, and some scenes don’t make much sense to the wider story, but considering what they started off with, what we ended up with is amazing. 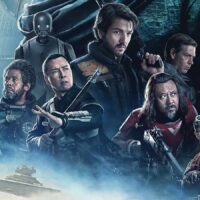