Harold Livingston, who wrote the screenplay for 1979’s Star Trek: The Motion Picture, has died. According to Variety, he died early Thursday morning. He was 97 years old.

The news of the writer’s death has already resulted in an outpouring of remembrances online. Fans took to social media to share pictures of, and anecdotes about, Harold Livingston. You can see some of those below.

By writing Star Trek: The Motion Picture, along with Trek creator Gene Roddenberry and Alan Dean Foster, Harold Livingston helped revitalize the mostly dormant franchise. By the time the film hit theaters, it had been a decade since fans had gotten any live-action appearances from their heroes. Though it suffered some harsh reviews at the time, TMP laid the foundation for the Trek film franchise, whose 14th entry is scheduled to begin production by the end of 2022.

Writing Star Trek: The Motion Picture was just one step in a long career and a full life for Harold Livingston. Though he wasn’t writing for Roddenberry’s signature show, his first screenwriting credits start the same year as Star Trek: The Original Series. He wrote “The Friendly Enemy” in 1996 for the espionage drama Blue Light. He continued to screenwrite — mostly for television — until the mid-1980s. His credits include episodes of Mission: Impossible, The Six Million Dollar Man, Mannix, Future Cop, and Fantasy Island.

Harold Livingston was also a novelist who published 6 novels between 1954 and 1993, starting with The Coasts of the Earth and ending with To Die in Babylon. His final book, the memoir No Trophy, No Sword, came out in 1994. It was reissued in 1998 as Destination Israel: How a Handful of Rag Tag Flyers Helped To Save a Newborn Nation.

No Trophy, No Sword chronicled one of the more incredible aspects of Harold Livingston’s life. As remembered by the LA Times, in World War II, Livingston served in the U.S. Army Air Forces transport squadron. In 1948, Harold Livingston was one of a number of pilots who risked their U.S. citizenship by flying supplies between Czechoslovakia and Israel for Israel’s Air Transport Command. He became one of the founding members of Israel’s Air Force, whose story was told in the 2015 documentary Above and Beyond. Livingston actually appears in the documentary in interviews. You can see him in the trailer below at about the 01:05 mark, talking about the benefits of not wasting testosterone.

While the single Star Trek movie Harold Livingston wrote is not the most beloved among fans, as Variety notes, commercially it was a hit — making $139 million on a $44 million budget. It was criticized for being too slow — including an infamously overlong shot of the Enterprise in space dock — and not having a particularly charismatic antagonist. However, in recent years TMP has earned some fans who appreciate it as a more meditative Trek flick.

In fact, while we don’t know if Harold Livingston had a chance to see it, Paramount recently remastered Star Trek: The Motion Picture — The Director’s Edition and released it on Paramount+. Judging by the scores on Rotten Tomatoes, it’s had a noticeable impact on the reactions to the film. When the news of the remaster was first announced, TMP‘s RT critics score was 41%. By March, it had grown to 44% and today it’s 48%. No, none of those scores are particularly good, but considering TMP is 43 years old, any movement up in the score at all is impressive. 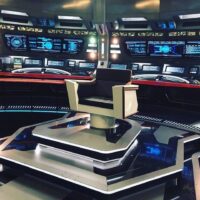