Star Trek: Picard is not everyone’s favorite show in the franchise and there are some valid criticisms against the series. However, love or hate it, you have to admit that by the end of the second season, almost all of the major recurring (and surviving) villains to ever hound the heroes in Star Trek: The Next Generation have shown up. The Romulans are one of the antagonists of season 1, John de Lancie‘s Q is a major player in season 2, and the Borg have been a huge presence in both seasons. So who will the Big Bad be for Picard‘s third and final season? According to the series showrunner, it’s someone we haven’t seen before, and we’re “not ready.”

That’s what Star Trek: Picard season 2 and 3 showrunner Terry Matalas said on Twitter recently, in response to a curious fan. The fan asked if the villain was new or someone we’ve already met. Matalas answered that the villain was new and added that the actor is someone that we’ve all likely seen “a million times before” and that Matalas has “always wanted to work with.” He ended the tweet with, “And… wow. You’re not ready.” You can see the tweet below.

Well considering he’s probably the only major recurring antagonist from TNG who has yet to appear in Star Trek: Picard (and who could be realistically revived) there may have been a lot of people betting on Data’s evil twin Lore — and, if so, unless Matalas is lying here, then clearly he’s not it. It’s someone we’ve seen “a million times before?” What does that mean?

The question becomes a lot more complicated when you consider that, as a Star Trek showrunner, Terry Matalas knows precisely who he’s talking to. So, by referring to someone we’ve seen “a million times before,” he could be referring to the kind of beloved character actor who shows up all over the place in TV series and movies. Or, he could be speaking to Star Trek fans — as in, someone Trek fans specifically have seen “a million times before.” The franchise is known for using certain character actors to play one role after another. Jeffrey Combs, who played not one but two of the most memorable recurring villains in Star Trek: Deep Space Nine — and, technically, way more than two because the villain Weyoun was constantly dying and getting cloned — as well as characters on Voyager, Enterprise, and Lower Decks is probably more famous among the fandom for coming back again and again to play different characters, but he’s hardly the only one. You can easily add to that list James Cromwell who played Zefram Cochrane in Star Trek: First Contact and Enterprise, Kurtwood Smith of That ’70s Show, Tony Todd of Candyman fame, and many more.

Then there’s the question of who this person we’ve seem “a million times before” is playing. Matalas says it’s a new character, but does that mean we’re necessarily talking about a completely new threat? We’re going to guess — and frankly, hope, since they’ve been done to death — we’re not talking about a Romulan or a new Borg character. But could this be a villain nevertheless part of an already established group? For example, how about the Dominion? We never did get to see any kind of clash between the Star Trek: The Next Generation crew and the Dominion, and their status since the end of Deep Space Nine remains a mystery. Or perhaps the group of too-briefly seen A.I. overlords who try and fail to take over, well, everything in the season 1 Picard finale? 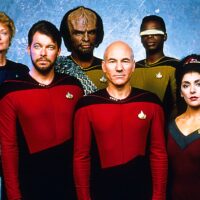