Star Trek has been all about the prequels for a while now. The Kelvin Timeline movies are kinda/sorta prequels, Discovery began as a prequel but by season 3 had become the show set the furthest in the future, and now we have Strange New Worlds; meant to chronicle the time that Christopher Pike (Anson Mount) captained the Enterprise. Or, at least, that’s what everyone thought. Now, it looks like the Star Trek creators are actually looking to have their newest live-action series bleed into the original series that started it all.

Star Trek: Strange New Worlds‘ inaugural season streamed its finale yesterday on Paramount+, and The Hollywood Reporter took the opportunity to talk to the series’ co-creator and co-showrunner Akiva Goldsman about the future. THR asked the Oscar-winner directly whether or not he hoped to see the prequel evolve “into a TOS iteration,” and Goldsman seemed to love the idea. “Let that be the biggest problem we have, should it go that long, to figure out how that works,” Goldsman said. “But nothing would make me happier than to continue through the TOS timelines and beyond.”

In a way, we’ve already seen a preview of something like this in “A Quality of Mercy,” the season 1 finale. The story gives Christopher Pike a vision of a possible future by taking him to the events of the 1966 original series episode “A Balance of Terror” which introduced the Romulans to Star Trek. Except in this version, Pike is still Captain of the Enterprise, and so everything turns out a lot differently. It also gave us our first look at Paul Wesley — Strange New Worlds‘ version of Captain James T. Kirk, the role made iconic by William Shatner.

Fans will no doubt have strong feelings about the notion of a new series retelling Star Trek “history,” and inevitably changing those stories. Fans of every franchise under the sun cry bloody murder over retcons and the like. But changing the actual episodes? Perhaps the entire original series?

The truth is ,however, that Star Trek “history” has been changed — and radically so — since the very first series. A conversation between DeForest Kelley’s Bones and Leonard Nimoy’s Spock in the first season implies Vulcans were initially meant to be a race conquered by humanity. All-important terms like “United Federation of Planets” and “Starfleet” aren’t even uttered until the second season. The same goes for subsequent series and movies. In a first season episode of The Next Generation, Wesley Crusher (Wil Wheaton) refers to the Klingons as being a part of the Federation.

At the same time, actually retelling older stories does go a bit further than most franchises like Star Trek are willing to go. It would have one potential benefit, and that would be doing away with the sometimes jarring differences in technology. It’s difficult to accept how the tech works on Strange New Worlds and then be confronted with the knobs, buttons, switches, and even printers of The Original Series; and accept that the latter is supposed to take place after the former. But the argument could very well be made — and perhaps should be made — that this wouldn’t make up for essentially nullifying the work of the cast and crew of the very first series. 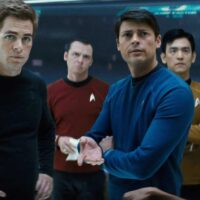 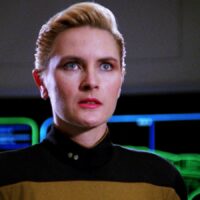