As the Star Trek universe continues to expand with Star Trek: Strange New Worlds, ads featuring Star Trek characters are beginning to hit the airwaves as CBS All-Access is in the middle of its rebranding as Paramount+.

The new 30-spot finds Spock (played by Ethan Peck) from Star Trek: Strange New Worlds nearly 28,000 feet up on top of “Paramount Mountain,” smartly wearing gloves and Vulcan ear muffs, with the likes of All Rise’s Simone Missick, who happens to be carrying her gavel with her on the snow-covered mountain, along with professional golfer Bryson DeChambeau and his caddie, all who are huddled around a puppet from Crank Yankers. The voice you hear at the introduction belongs to none other than Picard’s Sir Patrick Stewart.

The ad, which showcases the TV series as well as live sports and the Star Trek: Strange New Worlds series that will be coming to the new Paramount+ streaming service, is comedy all the way. The chilly quintet finds Spock kneeling down by the Crank Yankers puppet, who somehow has his hand encased in a block of ice. Spock diagnoses the hand as “puppet frostbite” informing them that amputation must follow. As the puppet wishes to talk about it, DeChambeau steps up and with one swing of his iron, knocks the block of ice, as well as the puppet’s arm, into the sky and off the mountain. The group proceeds to “golf clap” for DeChambeau, the puppet using his foot and remaining arm.

The presence of Spock in the ad, as well as Stewart’s narration, tells fans that the new Paramount is fully committed to Star Trek. Peck, along with Anson Mount and Rebecca Romijn, will lead the cast in the upcoming new series Star Trek: Strange New Worlds. The new series follows Mount’s Captain Pike, Peck’s young Spock, and Romijn’s Number One as they take the USS Enterprise out for a spin, set in the decade preceding Star Trek: The Original Series when James T. Kirk was at the helm.

Star Trek: Strange New Worlds brings together the three characters (Pike, Spock, and Number One) who were seen on Star Trek: Discovery with plans to give the series a more episodic feel to it, something series co-creator Alex Kurtzman hopes will please fans. Kurtzman, taking queues from fans who were displeased with the storytelling of Picard and Discovery, says Strange New Worlds plans on going old school as they attempt to resurrect the episodic adventure storytelling ways that made the Original Series so popular with fans. Co-creator Akiva Goldsman said via Screenrant, “We’re going to try to harken back to some classical ‘Trek’ values, to be optimistic, and to be more episodic. Obviously, we will take advantage of the serialized nature of character and story building. But I think our plots will be more closed-ended than you’ve seen in either ‘Discovery’ or ‘Picard.’”

As most Trekkies are well aware, the entirety of the older Star Trek shows were pretty much one-offs, meaning that each episode held its own singular story. There was the rare instance that episodes had multi-arcs, but that was few and far between. Kurtzman, as well as co-creators Jenny Lumet and Goldsman, plan to get back to the basics of Star Trek storytelling. Fans were truly displeased when Discovery premiered, breaking tradition from the episodic approach fans were accustomed to. The serialized way Star Trek: Discovery told its story rubbed fans the wrong way. Hopes were raised when Star Trek: Picard was announced, fans thinking a return to wonderful Star Trek storytelling was imminent, but that wasn’t to be. The dark turn rankled Trekkies. It sounds, though, judging by Goldsman’s comments, they may have learned their lesson with Star Trek: Strange New Worlds.

There is no date for the premiere of Star Trek: Strange New Worlds, though it’s shooting for the latter half of 2021. Paramount+ will kick off its rebrand on March 4, 2021. 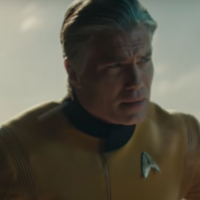