Star Trek and Star Wars fans may occasionally argue about which franchise is better, but at the end of the day not only are plenty of fans lovers of both, but the actors tend not to discriminate either. Case in point: it turns out of the newest Trek stars was in 2015’s The Force Awakens. Christina Chong, who plays Security Chief La’an Noonien-Singh on Star Trek: Strange New Worlds, shot a scene for the first film of the sequel trilogy, though sadly it was cut from the finished product.

The folks at Comic Book recently asked Chong about her cut Star Wars role, and apparently she would’ve shown up relatively early in the film on Jakku. The Star Trek actress didn’t seem to remember a specific name or species. “I was on set the first day of the shoot in Abu Dhabi in the middle of the desert,” Chong says. “I remember I had this whole purple headdress thing on and all this special makeup, so I was some kind of race of something. They were like, ‘Look, it’s only a small role, but it’ll be filming in Abu Dhabi and it’ll be great.'”

Chong said The Force Awakens was her first experience with a “huge” big budget set and the future Star Trek actress was floored by the sight of it. Her scene, performed with Daisy Ridley, involved lots of “explosions and crying,” and her character’s purpose was to highlight one of the more defining aspects of Daisy Ridley’s Rey. “I had a son,” Chong said. “I can’t remember exactly what the scene was about, but basically, Rey is alone, and I’m leaving with my son on this ship and she’s there on her own in the desert.”

At first — with the mention of explosions — it sounds like the Star Trek actress is describing the scene in which the First Order pursues Rey, Finn, and BB-8; forcing the heroes into stealing the dormant Millennium Falcon. But, obviously, Rey isn’t “on her own” by that point. So possibly Rey originally had some kind of dangerous encounter before then?

While she might not have wound up in the finished product, Christina Chong doesn’t seem to have anything close to regrets for working on the project. The Star Trek actress happily recalls seeing “all the stormtroopers and they were rehearsing their movement and stuff. It was incredible.” She also pointed out it was a pretty good payday for shooting scenes that never even wound up on the screen. “[W]e actually had to re-shoot because, I can’t remember, something went wrong and they had to re-shoot it,” Chong said. “But they re-shot it at Pinewood in London with a green screen. So I essentially got paid twice to do that job and ended up on the cutting room floor, which is amazing.”

Christina Chong has had an equally interesting journey as a cast member of Star Trek: Strange New Worlds, though for different reasons. Her character, La’an Noonien-Singh, is a distant relation of Khan Noonien-Singh – the villain of the original series’ “Space Seed” and 1982’s Star Trek II: The Wrath of Khan. She’s endured plenty of bullying and abuse because of her name, and it turns out this helped Chong relate to her character for a horrible reason. In real life Chong endured something similar but much uglier. She told THR, “Although my mom is English, my dad is Chinese. And I don’t necessarily look English, and I don’t necessarily look Chinese, but my name is Chong. And throughout my childhood, that brought on bullying and racism. The whole journey of both being judged, having that stigma attached to a name and who you are, was easily translatable and easy to personalize.” 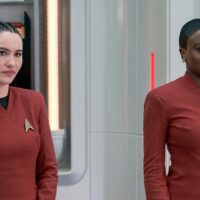 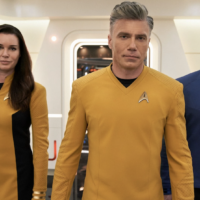