“Will she or won’t she?” That’s a big question that’s got to be on the minds of any Star Trek: Voyager fans who have been keeping themselves up to date on all things Trek. Back in June, Kate Mulgrew revealed that she was feeling much more open to the idea to returning to the role of Kathryn Janeway. Since then, fans have been speculating if Mulgrew was sending signals to Paramount, if there’s already a project lined up, or if it will all die on the vine. And now comes the news the former Voyager lead has been busy talking to her former co-stars about reprising their roles.

Mulgrew recently spoke to Den of Geek and confirmed she’d been talking about the idea of a return to her former Star Trek: Voyager co-stars. “We’re always talking,” Mulgrew said. “I mean my great friends are Robert Picardo and John de Lancie. We’re always touching down and crossing paths. And when we do talk about Star Trek, all of us are just so amazed that it constantly is reinventing itself. I think that fact only speaks to its sort of undying virtues. I know Jeri [Ryan] loves doing Picard. And I know that all of us — all of us — would love to continue and when the opportunity presents itself, we’ll always do more Star Trek.”

That sounds even more like we’re getting Mulgrew back in the captain’s chair in a live-action series than it did back in June. Saying, as she did last month, “I’m looking at it with new eyes,” is a lot less definitive than “we’ll always do more Star Trek.” It’s also encouraging to hear that Mulgrew is speaking with her former castmates because of something that’s been missing from Star Trek: Picard. While almost the entire regular cast of Star Trek: The Next Generation will be returning for Picard‘s third and final season, most have been missing in the first couple of seasons.

In at least one sense, Kate Mulgrew already has been back as Janeway. She’s voiced a holographic version of her signature character in Star Trek: Prodigy, and in season 2 of the animated series she’ll be playing the flesh-and-blood Janeway who will be an antagonist to the show’s young heroes. But it’s safe to say for most fans, hearing her voice an animated character just isn’t the same as seeing her back in live-action.

One big question that would have to arise is exactly why the characters of Star Trek: Voyager would be reuniting for a new adventure. After all, Voyager‘s premise was a bit more specific than most Trek series. It wouldn’t seem like a very good idea for the crew to just get lost in an unexplored quadrant of space all over again.

It could be that Star Trek: Prodigy will help with the answer. In the first season we eventually learn that the Starfleet ship the young heroes discover — the USS Protostar — was captained by Janeway’s former first officer Chakotay (Robert Beltran). We know Chakotay was able to escape the ship but we don’t know where he is now. Maybe the Voyager crew will reunite to find their old friend? 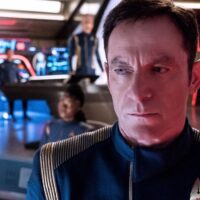